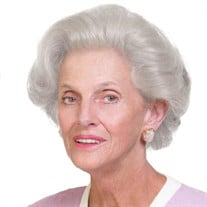 Exeter, NH - Carole Rose (Neri) Lembo of Palm Beach, FL, formerly of New York City, NY, and Spring Lake, NJ died on September 21, 2020. Mrs. Lembo graduated from The Dwight School for Girls in Englewood, NJ and Manhattanville College. She held a Master of Science degree in psychological counseling and a Master of Arts degree in European History. Upon graduation she entered the convent and was a religious of the Society of the Sacred Heart at the Convent in Albany, NY. During her time as a nun she served as Mistress of Novices for the United States as well as head of The Sacred Heart School in NYC. After leaving the convent in 1969 she continued her work in education holding positions as Director of Admissions at Newton College of the Sacred Heart in Massachusetts and Head of Admissions at The Spence School in NYC. In 1988 Mrs. Lembo became Director of The Episcopal Nursery School in NYC where she worked until her retirement in 1994. Privately, she served on various charity boards including Opportunity Early Childhood Education and Family Center in West Palm Beach, FL where she was Director of the Mary Alice Fortin Center and was honored with the Anthony Award for advocacy for children. Formerly, Mrs. Lembo was a member of the Board of Trustees and the Allocation Committee of the Town of Palm Beach United Way, a Eucharistic Minister and Pastoral Counselor at Good Samaritan Hospital, and a volunteer at Lourdes Noreen McKeen. She spent her life dedicated to the well-being of others and was beloved by all. Mrs. Lembo was married to Gregory L. Lembo from 1972 until his death in 2010. She is survived by her two daughters, Joanne Lembo and her wife, Lee Williams of Exeter, NH and Eleanor Ylvisaker and her husband Jon of New York City, NY; grandchildren, Elijah Lembo, Alastair Ylvisaker, Ella Ylvisaker, and August Ylvisaker. In lieu of flowers, memorial donations may be made to Opportunity Early Childhood Education & Family Center 4171 Westgate Avenue, West Palm Beach, FL 33409.

The family of Carole R. Lembo created this Life Tributes page to make it easy to share your memories.