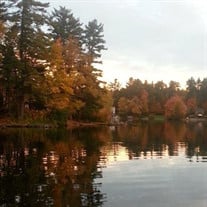 Seabrook – Carroll B. Pineo, 88, of Seabrook, died on Wednesday, April 25, 2018, after a long illness. He was born April 16, 1930 in Tremont, Nova Scotia, a son of the late Benjamin and Nellie (MacGinnis) Pineo. Carroll graduated from Northeastern University in 1954 with a BSME, and soon after began a lengthy career as a mechanical engineer at General Electric Co. in Lynn, MA, from which he retired after 34 years as the Principal Engineer of Bearings and Lubrication System Design in the Aircraft Engine Group, where he had one design patented. He was a member of the Seabrook, NH School Board for three years; Seabrook, NH Town Moderator for 8 years; served as a member of the NH Advisory Committee on Shore Fisheries since 1973, and was appointed as a Fish & Game Commissioner for Rockingham County, NH in 1993, becoming chairman for a term. Carroll was an outdoors man with a lifetime membership in the NRA who loved hunting and fishing with family and friends, and enjoyed smoking Griffin cigars. He was a practical, intelligent, hardworking man who excelled in handcrafting furniture and boats, using some boards that he made with the sawmill he built and operated occasionally. He also taught himself to weld and was very capable with electrical, plumbing and automotive repair. Carroll is survived by his wife, Faye (Smith) Pineo, whom he married July 19, 1952, and their children, Andrew Pineo and his wife Lynn, David Pineo and his wife Diane, Susan Provencher and her husband Mike, all of Seabrook and Frederick Pineo and his wife Jean of Cincinnati, OH; daughter in law, Ute Pineo of Hampton; grandchildren, Jennifer, Heidi, Jason, Leah, Michael, Danielle, Amanda, Evan and Caroline; six great grandchildren; sisters, Alice Perry, Norma Pineo, and Nancy Bourdeau; brother, Neil Pineo and his hunting and fishing friend, Burnham “Bing” Judd. In addition to his parents, he was predeceased by his brothers, Garth in infancy and David; sister, Elaine DeCosta, and great grandchild Eivan Curtis. Visiting hours will be held from 10 - 11 AM on Sunday, April 29, 2018 at the Remick & Gendron Funeral Home-Crematory, 811 Lafayette Road, Hampton. A memorial service will follow at 11 AM. Relatives and friends are respectfully invited. In lieu of flowers, donations may be made to a charity of one’s choice.

The family of Carroll B. Pineo created this Life Tributes page to make it easy to share your memories.

Send flowers to the Pineo family.