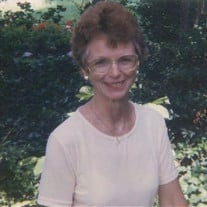 Rye - Catherine “Kay” Tallmadge Shriver Scott, of Rye, passed away peacefully on March 31, 2016, at the age of 81. She was born in Singareni Collieries, in what is now Andhra Pradesh, India, on December 9, 1934, to the late Catherine Tallmadge (Humphreyville) Shriver and the late Reverend George Van Bibber Shriver. Kay moved from India to Maryland with her family in 1945 and spent her youth in Maryland and Pittsfield, MA. She graduated from Hannah More Academy in Reisterstown, MD in 1952, and went on to study nursing at Hood College (Frederick, MD) and Massachusetts General Hospital Nursing School (Boston, MA), graduating in 1957. She began her nursing career in Boston, and married in 1960. Her married life brought her to Florida briefly, back to Boston and finally to the Keene, NH area, where she raised her four children. She had many experiences working in the nursing field, including several nursing homes, a doctors’ office, a visiting nurse team, traveling nurse assignments, a hospice team, and a psychiatric residential hospital. Her desire to live near the ocean brought her to the New Hampshire Seacoast in the early 1990’s where she resided, including 5 years in Sanford, Maine, for the rest of her life. Throughout her life, Kay loved to contra dance and travel. She was also very involved with Habitat for Humanities, Senior Moments, and Act One theatre troupes in NH Seacoast area. Her interests led her to adventures in Europe, the Middle East, Russia, Sri Lanka, India, Galapagos Islands, and New Zealand. She enjoyed a working vacation as one of the crew of the HM Bark Endeavour when it visited ports in the Pacific Northwest. She traveled the United States to visit her children in Portland, OR; Newark, DE; Tallahassee, FL; Cincinnati, OH; Norwalk, CT; and Westwood, MA. She found joy in life, and shared that joy with her children and grandchildren, sometimes in unconventional ways. Her family and friends look forward to sharing stories about her for years to come. Kay is survived by her children: Karen Louise Trosset and her husband Scott of Villanova, PA; Suzanne Catherine Scott and her husband Keith of Norwalk, CT; David George Watson Scott and his wife Julianna of Amherst, MA; and Timothy Alexis Scott and his wife Robin of Portland, OR; her grandchildren: Matthew, Jason and Allison of Villanova, PA; Phoebe, Finneas, Theo and Oti of Amherst, MA; her brother, George Van Bibber Shriver, Jr. of Tucson, AZ; her niece, Jennifer Shriver of Boulder, CO and many beloved cousins and friends. The family would like to thank the staff of Webster at Rye for the loving care provided to Kay over the last three years. A memorial service will be celebrated on Saturday, April 9 at 2pm at Trinity Episcopal Church, 200 High Street, Hampton. Relatives and friends are respectfully invited. In lieu of flowers, contributions can be made in Kay’s name to the charity of one’s choice or to Habitat for Humanity, PO Box 4428, Portsmouth, NH 03802-4428 www.senhhabitat.org.

The family of Catherine S. Scott created this Life Tributes page to make it easy to share your memories.

Send flowers to the Scott family.