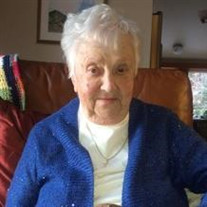 Campton, NH - Cecile R. Barron, 93, of Campton, formally of Hampton, NH, died peacefully at home on December 23, 2017 while in the care of her family. Born in Manchester, Cecile was the daughter of Honore Baron and Maria St. Germaine - Baron. Her family moved to CT in the late 1920's and she called that home for the majority of her life. She was the beloved wife of the late Frank C. Barron. Together they raised a family of 5 children in Preston, CT. Although she held various jobs, a school cook at Preston City School being her favorite, her life-long work was centered around building a loving bond of togetherness with her family. Whether it be preparing for annual camping trips to NH, weekly "Sunday Dinners" for a robust gang of 20 plus or babysitting and caring for grandchildren; she used these times as vessels to instill in her children and grandchildren, a love for family and an unconditional acceptance of each other. In her later years, Cecile enjoyed the hobbies of word search and crocheting. She completed afghans for her entire family and just about every friend who's path she crossed. She also made blankets for Project Linus, a nation-wide non-profit that spreads love and sense of security to seriously ill or traumatized children by providing the warmth of a hand-made blanket. She is survived by her children; Laurie Harville and her husband Gregory from Hampton, Kathy Wilson and her husband Michael from Campton, Michael Barron and his wife Bonnie from Griswold CT, Judith Cushman and her husband Rob from Mystic, CT and Sally Sheffield and her husband Jack of Campton. She was also the loving grandmother to 12 grandchildren and 11 great-grandchildren. A time for family and friends to gather to celebrate Cecile’s life and share a meal will be held on Saturday, the 27th of January, 2018 at 1:00 in the afternoon at The Canteen VFW Post 10004, 263 Taylor Hill Road, Jewett City, CT 06351. In lieu of flowers donations in her memory can be made to Speare Memorial Hospital in Plymouth, NH or Pemi-Baker Home Health also in Plymouth, NH.

Campton, NH - Cecile R. Barron, 93, of Campton, formally of Hampton, NH, died peacefully at home on December 23, 2017 while in the care of her family. Born in Manchester, Cecile was the daughter of Honore Baron and Maria St. Germaine - Baron.... View Obituary & Service Information

The family of Cecile R. Barron created this Life Tributes page to make it easy to share your memories.