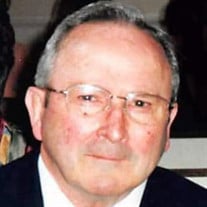 Hampton Falls - Charles E. Burwell, 91, a former longtime resident of Hampton Falls, passed away peacefully on Monday, April 6, 2020 at the Rockingham County Nursing Home in Brentwood where he had been living due to failing health. He was born in Saugus, MA on March 26, 1929, the middle son of the late Charles W. and Marian L. (Elmer) Burwell. He shared 55 wonderful years of marriage with his late wife, Vera (Cotton) Burwell who predeceased him in 2004. Charles grew up in Saugus, MA and graduated from Saugus High School with the Class of '47. He went on to attend the College of Agriculture 2-year program at the University of New Hampshire. During this time, he also served in the Naval Reserves. He later received an honorary BS degree from UNH for his work with Heifer International in West Africa. Mr. Burwell, along with his father, owned and operated a poultry and dairy farm in Hampton Falls from 1947-1975. During this time he served on the Board of Directors for New England Milk Producers. After he sold the family farm, he worked as a dairy technical advisor from 1975-78 for Heifer International in Cameroon, West Africa. Charles became the Program Director for Heifer International for the next 6 years and then began another livestock development project under the auspices of USAID, Winrock International and the Ministries of Agriculture on the island of Antigua. During this time, his wife served alongside him, offering hospitality to global staff and volunteers. Charles has been a member of both Exeter and Hampton Congregational churches as well as Westminster Presbyterian Church while living in Warner Robins, GA. He enjoyed serving as an elder, teacher, and stewardship advisor. Family members include two daughters, Rev. Deborah Knowlton of Hampton and Dr. Rebecca J. Corvey of Atlanta, GA; six grandchildren, Kathryn Corvey, Matthew Corvey and his wife, Elise; Sarah Knowlton, Daniel Knowlton and his wife, Laura; two great-grandsons, Joseph and Paul Corvey, and several nieces and nephews. In addition to his wife and parents, he was predeceased by his sister, Ruth Bellitti and his brother, Rev. Dr. Wesley Burwell of Exeter. His family gives thanks for his steadiness, warmth, love of his family and stewardship of the earth. Due to the recent pandemic, no services are planned for this time. Interment and a celebration service will be held when possible. If desired, memorial donations may be made to the First Congregational Church, 127 Winnacunnet Road, Hampton, NH 03842 or to Heifer International 1 World Ave., Little Rock, AR 72202. Please check back for service date and time updates.

Hampton Falls - Charles E. Burwell, 91, a former longtime resident of Hampton Falls, passed away peacefully on Monday, April 6, 2020 at the Rockingham County Nursing Home in Brentwood where he had been living due to failing health. He was born... View Obituary & Service Information

The family of Charles E. Burwell created this Life Tributes page to make it easy to share your memories.

Send flowers to the Burwell family.