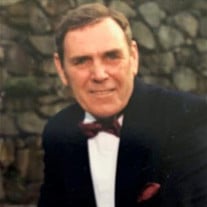 Seabrook – Charles Joseph Carline, Jr., 90, of Seabrook and formerly of Billerica and Tewksbury, MA, passed away peacefully on Monday, January 13, 2020 surrounded by his family. Charles was born in Boston on March 4, 1929, a son of the late Charles J. and Ellen (Cardinal) Carline, Sr. He shared over 51 beautiful years of marriage with his beloved wife, Norma (Warren) Carline, who died in 2000. Charles was raised in Billerica. In 1949 he married Norma, his high school sweetheart, and they settled in Tewksbury to raise their family. Charles owned and operated C&D Construction of Tewksbury and in 1968, moved to Hampton and worked as an ironworker in the construction of the Seabrook Power Station. His third career started in the late 1980’s as a bartender at The Old Salt Restaurant in Hampton during the late 1980’s and 90’s. He cherished the friendships he developed while there and became a treasured friend, mentor and guide to many, many people. He was an outgoing people person who could tell a great story with a great sense of humor. He listened, made others feel important and was the first to assist someone in their time of need. Charles was a family man; he adored his children and absolutely cherished his grandchildren. He will be sadly missed by his family and many, many friends. He leaves his sons, Charles Carline, III and his wife, Theresa of Raymond, Stephen Carline of Austin, TX and Scott Carline and his wife, Tara Gray of sandwich, MA, his daughters, Ellen Giuca and her husband, Jim of Hampton and Donna Donahue and her husband, Kevin of Eliot, ME and his sister, Eleanor Andrews of Newburyport, MA. He also leaves his 11 grandchildren, 18 great grandchildren and 13 nieces and nephews. In addition to his parents, Charles was predeceased by his brother, Joseph Carline and his sisters, Elizabeth Campbell and Patricia DiBiase. Visiting hours will be from 1 to 4 PM on Sunday, January 19, 2020 in the Remick & Gendron Funeral Home-Crematory, 811 Lafayette Road, Hampton. Services will be on Monday at 1 PM in the funeral home with burial to follow in the High Street Cemetery, Hampton. In lieu of flowers, donations can be made to High Point House, Merrimack Valley Hospice, Haverhill, MA.

Seabrook &#8211; Charles Joseph Carline, Jr., 90, of Seabrook and formerly of Billerica and Tewksbury, MA, passed away peacefully on Monday, January 13, 2020 surrounded by his family. Charles was born in Boston on March 4, 1929, a son of the... View Obituary & Service Information

The family of Charles J. Carline created this Life Tributes page to make it easy to share your memories.

Send flowers to the Carline family.