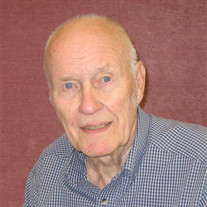 Peabody, MA – Charles E. Chesley, 97, of Peabody and a former longtime resident of Haverhill, passed away peacefully at Braeburn at Brooksby Village, Peabody MA on Monday, January 27, 2020. He was born November 13, 1922 in Haverhill, a son of the late Edward and Margaret (Kimball) Chesley. Mr. Chesley graduated from Haverhill High School with the Class of 1941 and Burdett College in Boston in 1942. He was a veteran of WW II serving with the US Navy as a gunnery specialist. He started work in the shoe industry before beginning his 30-year career as a firefighter with the City of Haverhill. He was the owner of the Bargain House a second-hand furniture store in Haverhill. He was a member of Riverside Memorial Church, was an active member of the Haverhill community having served as a 30-year member, past president and board member, of the Winnekenni Castle Foundation and received recognition for his leadership of restoration projects and fundraising for the Castle. He was a member of Kiwanis, served on the Board of Girls Incorporated of Greater Haverhill. He also supported the Haverhill Historical Society, and was a member of the Walnut Square Association and Cedardale Health Club. He also enjoyed collecting old postcards of Haverhill. Mr. Chesley was named Haverhill Firefighter of the Year by the Kiwanis Club, shared several honors with his wife including the B’nai B’rith for Distinguished Service Award, the Greater Haverhill Chamber of Commerce Community Leadership Award and recognition from the mayor and city council of Haverhill for countless acts of community service. He is survived by his wife of 67 years Jean L. (Gray) Chesley, his two sons, Wayne (Charlene) of Springfield, VA and Glenn (Maureen) of Danvers, grandchildren, Kevin (Heather), Kristin (Tom) Dunaway, Katie and Matthew Chesley, great grandchildren, Lucy Chesley, Vivian, Charles and Graham Dunaway, brother Kimball Chesley of San Diego, CA, and many nieces and nephews. He was predeceased by his sister Margaret “Peg” Johnson and his brother, Winslow Chesley. Private services will be held in Linwood Cemetery, Haverhill. There will be a celebration of his life at a later date. Donations may be made to Winnekenni Castle Foundation, Inc., PO Box 403, Haverhill, MA 01831 or the Benevolent Care Fund at Brooksby Village, 100 Brooksby Village Drive, Peabody, MA 01960.

The family of Charles E. Chesley created this Life Tributes page to make it easy to share your memories.