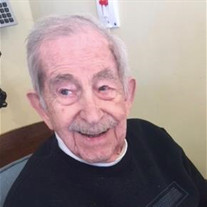 On Sunday, September 8, 2019, Charles E. Leslie, loving husband and father of three passed away at the age of 94. Charles E. Leslie was born in North Andover, MA on July 15, 1925. As soon as he could drive he got a job delivering flowers for Wagland’s Florist Shop. “Charlie” later proudly served his country as a radio operator in the Navy during WWII and Korea. After the war, he began his career with Western Electric while attending night courses at Northeastern University. He graduated with a degree in Electrical Engineering then as an electrical engineer, worked his way up through the ranks at Western Electric. He went on to become a process engineer, division chief, and assistant Plant Superintendent, while working at the Merrimack Valley Works. Charlie was promoted to Plant Superintendent to manage a new plant in San Ramon, California, in the early 70’s. After the telecommunications technology shifted to microchips, the San Ramon plant closed and he completed his career as Assistant Plant Superintendent at the Richmond, Virginia Works. Charlie held degrees in both engineering and management. A very civic-minded citizen, Charlie served on the Town Council, Planning Board, Building Committee, School Board, and was president of the Taxpayers Meeting Association during his years living in Methuen, MA. He later rekindled his love for community while serving on the River Hills Homeowners Association, in River Hills, S.C., where we are told he caused a bit of a ruckus. Charlie had many interests; early in life he collected stamps and coins, and he loved to follow college football. He enjoyed working his Ham Radio and conversing with people around the world. He was a tournament winning bowler- participating in many leagues in the Merrimack Valley- but his true sport was golf. Charlie was a member of the Merrimack Valley Country Club in Methuen, MA, and later a member at Far Corners Golf Club in Boxford, MA. He and his wife, Lorraine, golfed at courses along the entire coast of California, became members of the Country Club of Virginia, and then settled as Founding Members of the River Hills Country Club in South Carolina, where they lived for 28 years. Charlie moved to Rye, New Hampshire in 2018, to be closer to his daughter Roberta and stepdaughter Dianne. Charlie is predeceased by his wife of 43 years, Lorraine V. Leslie and their Son-In-Law, Eugene R. Guilmet. He is survived by his daughters Linda Colan and her husband Mark, of Dover, NH, Sharon Rosenblum and her husband Andrew, of Fox Point, WI, Roberta Orsini and her husband Samuel, of South Berwick, ME, and their mother Thurley Lesie of Methuen, MA. and Step Daughter, Dianne Guilmet of Hampton, NH. He is also survived by five Grandchildren, Leah Zientek and her husband Nate, Francesca Orsini and her wife Hillary, Adam Rosenblum and his wife Carissa, Jessica Orsini, Seraphina Orsini, two Great- Grandsons, Olin Zientek and Leo Rosenblum, along with one Great Granddaughter, Lillian Orsini. The family wishes to extend its thanks to the staff at Evolve Senior Living at Rye for their excellent care. At the family’s request all services will be private. In lieu of flowers, the family requests donations may be made to the Alzheimers Association , 225 N. Michigan Ave., Fl. 17, Chicago, IL 60601.

On Sunday, September 8, 2019, Charles E. Leslie, loving husband and father of three passed away at the age of 94. Charles E. Leslie was born in North Andover, MA on July 15, 1925. As soon as he could drive he got a job delivering flowers... View Obituary & Service Information

The family of Charles E. Leslie created this Life Tributes page to make it easy to share your memories.

Send flowers to the Leslie family.