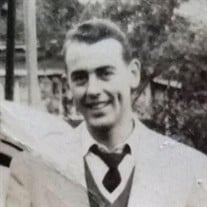 Rye - Charles W. “Bill” Rogers, Jr., 98, of Rye, passed away on Sunday, May 16th, 2021 at Webster at Rye after a brief battle with cancer. He was born on July 7th, 1922 in Mt. Vernon, NY, a son of Charles W. Rogers, Sr. and Martha Amy Bartlett Rogers. After spending his childhood in Mt. Vernon, he and his family moved to Old Town, ME, where he met his high school sweetheart and beloved wife of more than 66 years, Geraldine Marie Duplissa Rogers. Bill served in the Navy during WWII before earning a Business degree at the University of Maine and becoming a traveling salesman. He and Geri moved to Rye in 1966, where he eventually retired. Bill had an unmatched sense of humor and zest for life and could usually be found laughing and telling jokes and stories. A man of remarkable resilience, despite sudden and complete loss of his eyesight at the age of 68, Bill continued to stay active by taking walks with his dear seeing-eye dog Quantus, doing yard work, reading books on tape, and winning trivia games held at the public library. He was a lover of history, sports, and jazz music, but more than anything, he loved his family. He leaves behind his daughter, Nancy J. Rogers, his son, Timothy C. Rogers, his daughter-in-law, Laong Corcoran, and his pride and joy, his granddaughter Monica A. Rogers (aka “Chips”). Along with his wife, Geri, he is pre-deceased by his dear son, Peter B. Rogers. A graveside memorial service will be held at 10am on Saturday, May 22nd at Rye Central Cemetery. Gifts in his memory may be made to the New Hampshire Association for the Blind

The family of Charles Wilson Rogers Jr. created this Life Tributes page to make it easy to share your memories.

Send flowers to the Rogers family.