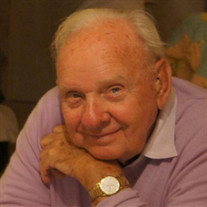 Hampton Falls - Charles “Charlie, Doc” Frank Savage, 98, of Hampton Falls, died peacefully on March 29, 2019 at Evolve at Rye. Charlie was born in Dorchester, MA on January 23, 1921 to Edgar and Hattie Savage. He graduated from Framingham High School in 1941 and joined the Navy in 1943, earning his Naval Air Wings in 1944. He loved his time flying, in the military and beyond. In 1944, Charlie married Lucille “Jimmie” Close in Pensacola, Florida. After four years in the Navy, Charlie and Jimmie settled in Hampton Falls. For 19 years he managed Scott Pontiac Auto Body Shop in Hampton. In the 50's and 60's Charlie and Jimmie worked endlessly to fulfill their dream of creating a campground in their woods. Wakeda Campground opened in 1965 with 26 sites. This year Wakeda begins its 54th season with 400 sites. Charlie was justifiably proud of his accomplishment and was happiest when digging with his backhoe or cruising the woods in his golf cart. Charlie and Jimmie enjoyed many years of travel and especially loved the time they spent at their winter home in Nokomis, Florida. His many hobbies included beekeeping, fishing, boating, flying, shrimping, gardening, and panning for gold. Charlie is survived by his wife of 74 years and his three children: Terry (Jane) Savage of Brentwood, Jan Hambleton of Hampton Falls, and Karen (Kevin) Bark of Fort Davis, TX. In addition he leaves six grandchildren: Kerry Savage, Todd Savage, Amanda Allen, Adam Ciardelli, Ryan Hambleton, and Laura Ferrigno, and seven great-grandchildren. He is also survived by his sister, Martha Baker of Connecticut and several nieces and nephews. Charlie was predeceased by his brother Winthrop Savage, his sister Barbara Toppan, and his son-in-law Mike Hambleton. The family would like to thank the staff at Evolve at Rye for their compassion and excellent care and Beacon Hospice for their support. A celebration of his life will be held from 1-3 PM Saturday, May 4, 2019 at Wakeda Campground, 294 Exeter Road, Hampton Falls, NH. All are welcome. If desired, donations in Charlie's memory may be made to Alzheimers Association PO Box 96011 Washington DC 20090. Assistance with the arrangements was by the Remick & Gendron Funeral Home-Crematory, Hampton.

The family of Charles F. Savage created this Life Tributes page to make it easy to share your memories.

Send flowers to the Savage family.