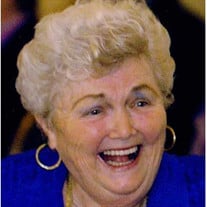 Hampton – Charlotte K. Preston, 84, of Hampton, also regarded by many as “The First Lady of Hampton”, died Tuesday, February 2, 2016 at Healthpark Medical Center in Fort Myers, Fla. where she wintered the past 15 years. She was born October 7, 1931 in Lawrence, Mass., a daughter of the late Raymond V. and Annie M. (Reason) Keefe. Charlotte was raised and educated in Lawrence and was a graduate of St. Patrick Grammar and St Patrick High School and went on to earn her nursing diploma from the Catherine Labouré School of Nursing at St. John’s Hospital in Lowell, Mass. She shared 63 years of marriage with the love of her life, former State Senator Robert F. Preston. Charlotte met Bob in 1948 as a 16 year old blue eyed girl working as a clerk at the Rexall Drug Store at Hampton Beach. Bob was working as a dishwasher at the former Kelly’s Restaurant also at Hampton Beach and it was love at first sight. Mrs. Preston had worked as a registered nurse at the former Bon Secours Hospital in Lawrence for decades and volunteered as the school nurse at Sacred Heart School in Hampton for several years. She also remained an active member of St. John’s Alumni Association. At the time of her death Charlotte and Bob were one of the oldest couples in business at Hampton Beach, founding Preston Real Estate over 50 years ago. Prior to that, Bob ran a hot dog stand at the old Ashworth Hotel. She also owned and operated the former Yankee Lady Gifts and Apparel Shop at Hampton Beach. She was longtime communicant of Our Lady of the Miraculous Medal Parish and was a member of the former Catholic Women’s Club. She was a life member and most active recruiter of the 100 Club of NH raising funds for the benefit of fallen police officers, firefighters and their families. She was the “go to lady” for raising money for any and every cause to benefit others. People knew that when they met or received a call from Charlotte she would be seeking assistance to help the more needy. Charlotte was supervisor of the checklist in Hampton for decades, the former chair of the Democratic Party of Hampton and was very active in the Democratic political community. She was a proponent of organ donation and successfully lobbied for having NH driver’s licenses annotated with the organ donor logo. Over 15 years ago she helped find the location of the Soup Kitchen and Clinic at C Street and Ashworth Avenue at Hampton Beach that has grown to serve ten to twelve thousand meals each year. She was also a member of the Hampton Rotary Club and was the recipient of the Paul Harris Fellow award In addition to her beloved husband Bob, she leaves five children, Maryrae Preston and husband Kevin Reusch of Hampton, Martha-Anne Preston and partner Paul Himmer of Seabrook Beach, Bob Preston and partner Angela Anderson of Hampton, Charlie Preston and partner Susanne Kolosey, James Preston and wife Heather of Seabrook Beach, many grandchildren and great grandchildren, her siblings, Maryrae Whalley and husband Edward of Lynnfield, Mass., Joan Cargill and husband David of Lawrence, Mass., Denise Menery of Hampton, Bonnie Hoffman of Cleveland, OH and scores of nieces and nephews. In addition to her parents, she was predeceased by her brother, Charles Keefe, and sisters, Margaret Rice and Virginia Fleming. Visiting hours will be from 3-7 P.M. Sunday, February 7, 2016 at the Remick & Gendron Funeral Home-Crematory, 811 Lafayette Road, Hampton. A mass of Christian burial will be celebrated at 10:30 A.M. Monday, February 8, 2016 at Our Lady of the Miraculous Medal Church, 289 Lafayette Road, Hampton. Burial will follow in the High Street Cemetery, Hampton. Relatives and friends are respectfully invited. In lieu of flowers, donations may be made to Experience Hampton (a community organization for the betterment of the Town of Hampton) P.O. Box 1601, Hampton, NH 03843.

The family of Charlotte K. Preston created this Life Tributes page to make it easy to share your memories.