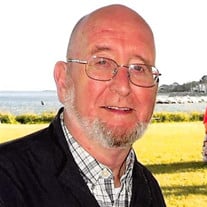 Stratham – Christopher Loren Couch, 77, of Stratham, formerly of North Hampton, passed away peacefully on Wednesday, February 27, 2019 at the Exeter Hospital. He was born in Randolph County, Indiana on March 21, 1941, the son of the late Benjamin and Mary (Montgomery) Couch. Chris was raised in Marion, IN and graduated from Van Buren High School of Van Buren, IN with the Class of 1959. Chris was a veteran of the United States Navy and a member of The Hamptons, American Legion Post 35. He married his beloved Erna Mae (Dickerman) Couch in 1975 and they eventually made their home in North Hampton until relocating to Stratham in 2000. Chris worked at the Portsmouth Naval Shipyard for over 34 years. He started his career as an electrician and retired as a Logistics Management Specialist in 2003. Always active in his community, Chris served as an on-call volunteer firefighter with the North Hampton Fire Department and volunteered his time as a coach and manager with the Rye Little League. He and Mae were also active with the Pease Greeters for over 7 years, welcoming home over 1,000 flights and were also volunteers with Fence Force Flagline, honoring our returning veterans in many different ways on many different occasions. In addition to Mae, his devoted wife of over 43 years, Chris is survived by his sons, Chad Curtis and his wife Michelle of Epping, Jim Couch and his wife Kristi of Dover, Ben Couch and his wife Dawn Marie and Gordon Couch and his wife Amanda and his daughter Laurianne Belanger and her husband Richard of Berwick, ME. He also leaves his grandchildren, Christopher, Ryan, Cameron, Jacob, Tyler, Grace and Maria, his great grandchildren, Shealy, Mikhail, Noah and Brayden and his sisters, Vonna Carroll and Pam McPherron, both of Indiana. Visiting hours will be from 10 am to 12 pm on Wednesday, March 6, 2019 in the Remick & Gendron Funeral Home-Crematory, 811 Lafayette Rd., Hampton. Services will immediately follow at 12 PM in the funeral home. In lieu of flowers, memorial donations may be made to the Fence Force Flagline at www.fenceforceflagline.com.

Stratham &#8211; Christopher Loren Couch, 77, of Stratham, formerly of North Hampton, passed away peacefully on Wednesday, February 27, 2019 at the Exeter Hospital. He was born in Randolph County, Indiana on March 21, 1941, the son of the late... View Obituary & Service Information

The family of Christopher L. Couch created this Life Tributes page to make it easy to share your memories.

Send flowers to the Couch family.