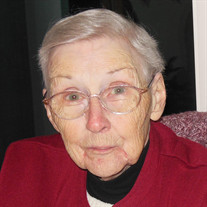 Hampton, NH – Clara L. Winsor, 92, of Hampton, died peacefully Friday, May 13, 2016 at Brigham Health & Rehabilitation in Newburyport. She was born May 3, 1924 in Lynn, MA, daughter of the late Charles H. and Florence (Bradshaw) Henshaw. Raised in Lynn, she graduated from Lynn English High School with the Class of 1942. Following graduation Clara went to work for General Electric in Lynn as an assembly line worker, before meeting her husband in 1946 and becoming a dedicated homemaker. After her children were grown she returned to work at Transitron Company in Wakefield, MA from 1975 to 1978 and General Electric (Factory of the Future) in Lynn from 1978 until her retirement in 1988. She shared 30 years of marriage with her late husband Thomas C. Winsor Jr. who died in July of 1991. She made her home in the Newburyport area from 1987-2001 before moving to Hampton, where she had resided up to her passing. Clara enjoyed sewing, gardening, reading, and, in her later years, quilting. Family members include her daughters Karen L. Langlais and her husband George of Georgetown, MA and Robin S. Winsor of Hampton; a brother Richard J. Henshaw, Sr. and his wife Joan of Danvers, MA; granddaughters, Heather DePaolo and her husband Rob of Newburyport, MA and Alyssa Langlais of Groveland, MA; great grandchildren, Zachary, Bodhi, Josilyn, and Benjamin. She also leaves several nieces and nephews. In addition to her parents and husband she was predeceased by her sisters, Dorothy E. Fultz, Gladys A. Anthony and Sylvia Baldwin. She was also predeceased by her nephew, Karl A. Fultz. A graveside service will be held at 1 PM on Friday, May 27, 2016 in Pine Grove Cemetery, 145 Boston Street, Lynn, MA 01904. Relatives and friends are respectfully invited. In lieu of flowers the family requests donations to the Boston Children’s Hospital Trust, 401 Park Drive, Suite 602, Boston, MA 02215.

The family of Clara L. Winsor created this Life Tributes page to make it easy to share your memories.

Send flowers to the Winsor family.