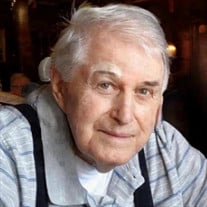 Hampton, NH – Clarence Foster “Babe” Sawyer, Jr., 89, of Hampton, formerly of Lynn, MA, passed peacefully Tuesday, May 17, 2022 at Cornerstone. He was born in Lynn, MA January 1, 1933, son of the late Clarence F. and Hazel (Clark) Sawyer. Babe was raised in Saugus, MA and graduated from Saugus High School and later graduated from Wentworth Institute. He served proudly with the US Navy during the Korean War. Babe was employed as a machinist first at the United Shoe in Beverly and then later for General Electric Corporation in Lynn for over 35 years before retiring in 1994. Babe was predeceased by his second wife Mary (Casey) Sawyer in 2019 and his first wife Mary B. (Hennessy) Sawyer in 1975. He leaves four children, Susan Conboy and husband John of Alton Bay, Patricia Corso and husband Jude of Hampton, John Sawyer and wife Joanne of Salem, MA, Scott Sawyer of Mansfield, MA, four grandchildren, Michael, Christopher, Jacqueline, John, five great grandchildren, Jacob, Devin and Henry Langer, Jacob and Joshua Morin, his brother Ronald Sawyer and wife Joan and nieces Carol, Lisa and Robin. Babe truly loved life and had a zest for living. He attended many functions like dances at the Irish club and other get togethers. He also loved the trips he took to Ireland. The last three years of his life at Cornerstone at Hampton had been some of his happiest times. He found a supportive community of friends and caregivers and looked forward to what each day would bring. His favorite activities were Happy Hour and the Sunday Poker Games. He was also an avid cribbage player. Babe was able to continue this passion with his close friend Jim. They’ve been playing at least twice a week for the past three years and had a friendly rivalry which they both enjoyed. On behalf of our father we would like to express how grateful we are for the incredible staff and caregivers of Cornerstone over the past three years and of Beacon Hospice in recent weeks. You have no idea what a remarkable difference you made in his life and we are eternally thankful for all you have done. A visiting hour will be held from 11 A.M. to 12 Noon Tuesday, May 24, 2022 at the Remick & Gendron Funeral Home-Crematory, 811 Lafayette Road, Hampton. Services will immediately follow at 12 Noon in the funeral home. Relatives and friends are respectfully invited. Private interment will be held in Pine Grove Cemetery, Lynn, MA. In lieu of traditional remembrances, donations may be made to National Kidney Foundation

The family of Clarence "Babe" Sawyer, Jr. created this Life Tributes page to make it easy to share your memories.