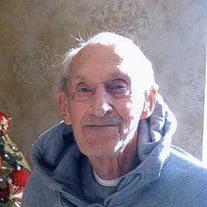 North Hampton – Clarence J. Corey, 92, formerly of North Hampton, died, Monday, January 2, 2017 in Worcester, Mass. He was born in Worcester, September 27, 1924, a son of the late Milan B. and Ida (Aubuchon) Corey. Mr. Corey was raised in Worcester and graduated from the Worcester Boys Trade High School. Shortly after high school, he enlisted in the U. S. Army. Clarence spent 30 months in the European Theatre of Operations as a mechanic with the 552nd Ordnance Heavy Maintenance Tank Company. He was part of the Normandy Invasion Forces with his twin brother Herbert, who was killed in action during the invasion and fought in Northern France, Rhineland, Ardennes and Central Europe. He returned from the war and earned a degree in aeronautical engineering from Boston University. Clarence and his brother Arthur, who died in 2002, moved to North Hampton in the 1950s. He worked as a repair technician for Tri-Rental in Hampton for over 28 years. He was a communicant of St. Theresa Church in Rye Beach and also attended mass at Corpus Christi Parish in Portsmouth. Clarence was a regular at Nancy’s Kitchen in North Hampton and was a main fixture at the former Yoken’s Restaurant of Portsmouth. He was a self-proclaimed “canologist”, who stayed busy collecting aluminum cans from around the area. He and Arthur were well-known for their early morning walks along the beaches picking up cans. Perhaps Clarence will best be remembered for his happy-go-lucky personality, his continuous smile, and the hugs he shared with nearly everyone he met. Clarence is survived by his many nieces and nephews and his good friends, James and Lori Booth of North Hampton and his friends at Tri-Rental in Hampton. He was predeceased by his brothers, Stephen, Arthur, Kenneth, Walter, Herbert, Raymond and his sister Bertha. Visiting hours will be from 9:30 A.M. -10:30 A.M. Friday, January 6, 2017 at the Remick and Gendron Funeral Home – Crematory, 811 Lafayette Road, Hampton. A Mass of Christian Burial will be celebrated at 11 A.M. Friday immediately following the visitation in St. Theresa Church, 815 Central Road. Rye Beach. Private burial will be in the NH State Veterans Cemetery, Boscawen. Relatives and friends are respectfully invited. In lieu of flowers, donations may be made in Clarence’s name to St. Theresa Church.

The family of Clarence J. Corey created this Life Tributes page to make it easy to share your memories.

Send flowers to the Corey family.