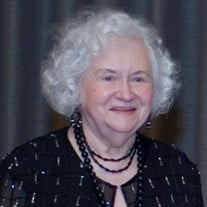 Fort Myers, FL – Claudia L. Bakios, 92, of Fort Myers, formerly of Hampton and Pelham, NH as well as Methuen and Lawrence, Mass., died Friday, June 24, 2016 at Hope Hospice in Fort Myers after a period of failing health. She was born February 26, 1924 in Lawrence, Mass., a daughter of the late Stephen and Blanche (Clermont) Martin. Claudia attended Lawrence schools and was crowned Miss Lawrence in 1944. Even though she had the opportunity to have a modeling career, she chose to marry the love of her life Anthony Bakios and raise a family. She shared 60 years of marriage with her husband who predeceased her in 2005. While raising her family she was employed by the B.F. Goodrich Company as an inspector in their shoe manufacturing plant in Watertown, Mass. She loved to go shopping and was noted for her impeccable wardrobes and classy looks. Mrs. Bakios made her home in Fort Myers the past 8 years, coming from Hampton, NH. Family members include her daughter, Donna J. Cicale and her husband Robert of Fort Myers, her son, Ronald G. Bakios of Cape Coral, four grandchildren, six great grandchildren and five great great grandchildren, her sister, Theresa Perry of Brooksville, FL, nieces and nephews. In addition to her husband, she was predeceased by her brother, Raymond Martin and sisters, Frances Martin and Cecile LaFlamme. Visiting hours will be from 6-8 P.M. Wednesday, June 29, 2016 at the Remick & Gendron Funeral Home-Crematory, 811 Lafayette Road, Hampton, NH. A mass of Christian burial will be celebrated at 10 A.M. Thursday, June 30, 2016 at Our Lady of the Miraculous Medal Church, 289 Lafayette Road, Hampton, NH. Relatives and friends are respectfully invited. In lieu of flowers, donations may be made to Hope Healthcare and Hospice, 9470 Health Park Circle, Fort Myers, FL 33908.

The family of Claudia L. Bakios created this Life Tributes page to make it easy to share your memories.

Send flowers to the Bakios family.