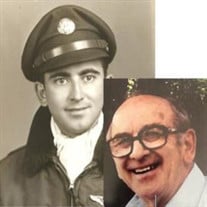 Hampton – Clifford Ludger Lajoie, 98, of Hampton, passed into the presence of his Lord on Sunday June 27, 2021 at his home surrounded by family. Born on December 4, 1922 in Van Buren, Maine, Clifford will always be remembered as a good, kind man. He had a heart for service, which was witnessed in his 25 years of faithful and honorable commitment to his country through the Air Force, a veteran of WWII, the Korean and Viet Nam wars. This career was followed by 14 years as a custodian at Hampton Centre School, where he was regarded as a kind, generous, and wonderful role model for the teachers and students alike, treating everyone with dignity and respect. After his time at Centre School, Clifford enjoyed serving new friends and colleagues for over 20 years as a custodian at Seacoast Credit Union. Whether at work or in the community, Cliff tried to bring a smile to everyone he met. He would always share a little joke, particularly with the welcomed faces at Hannaford, even though sometimes having to explain himself to the younger generation that didn’t quite catch on. He appreciated the companionship of the team at Hoaty’s Restaurant and the Airfield Café. Clifford was always touched and humbled by the kindnesses shown to him. For 34 years after his retirement from Centre school, many continued to celebrate his birthday with him. He treasured moments of conversation with his mailman who became dear to him. Cliff would frequently brighten his day with a KitKat to keep him going. Clifford is a son of the late Ludger and Rose (Deveau) Lajoie. He grew up in Van Buren with his 8 brothers and sisters Adolphe, Emery, Arthur, Marcel and Clement Lajoie, Adele Christie, Rita Saucier, all who predeceased Clifford, and his surviving sister Jeanette Patnaude. He cherished and fondly remembered his home town of Van Buren and loved to return for visits. Cliff shared 58 years of marriage with Ramona (Deschaine), the love of his life, who predeceased him in August, 2009. They raised their family of 8 children: four sons, David of Belfast, ME, Daniel of Hendersonville, TN, Alan and Jason both of Hampton, and four daughters, Brenda Malloy of South Berwick, ME, Susan Levesque of Nashua, Lisa Baillargeon of Seabrook, and Andrea Janiak of Hampton. Clifford relished the company of his sons- and daughters-in-law, 11 grandchildren, 8 great grandchildren, and many nieces and nephews, his “adopted” family Paul, Karen, Kristen, Amy, and Greg Whitmore, and dear friend John Mooney. Clifford always strived to be a model of a good work ethic, commitment to faith and family, and live a life of peace and respect. His children feel blessed with his long life and in being able to support him in companionship and caregiving over the last 12 years. Cliff was a faithful communicant of Our Lady of the Miraculous Medal Church of Hampton and an active member of the Holy Name Society. He was also a member of American Legion Post 35 of Hampton. Visiting hours will be held from 4 pm to 6 pm on Thursday, July 1, 2021 in the Remick & Gendron Funeral Home-Crematory, 811 Lafayette Rd., Hampton. A Mass of Christian Burial will be celebrated at 11 am on Friday, July 2nd at Our Lady of the Miraculous Medal Church, 289 Lafayette Rd., Hampton. Burial will follow in the High Street Cemetery, Hampton. Relatives and friends are respectfully invited. The family suggests donations be made in Cliff’s name to the Lourdes Center, 698 Beacon Street, Boston, MA 02215.

Hampton &#8211; Clifford Ludger Lajoie, 98, of Hampton, passed into the presence of his Lord on Sunday June 27, 2021 at his home surrounded by family. Born on December 4, 1922 in Van Buren, Maine, Clifford will always be remembered as a good,... View Obituary & Service Information

The family of Clifford L. Lajoie created this Life Tributes page to make it easy to share your memories.

Send flowers to the Lajoie family.