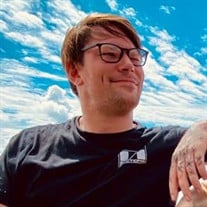 Manhattan, NY - Colin Patrick Cotter was an epic force of chaotic-good until the witching hours of Friday, July 31st 2020. Colin’s life ended prematurely, not by any choice or design of his own and with deep sadness and shock from his family and friends. Colin was born in Santa Cruz, California and adopted by his loving parents Bruce and Betsy Cotter. He spent most of his early childhood choosing the opposite adventure as his sister, Kristen in all the Goosebump books, watching Ace Ventura movies on repeat and wishing he was a sumo wrestler. Colin later graduated from Exeter High School in Exeter, NH in 2007 after his family moved to Stratham, NH in 1999. For the last 7 years Colin was living his best life in New York City, working in lighting tech and production management and frequenting Duff’s, Lucky 13 and Elsewhere in his off-hours. He spent his Sundays longboarding alongside his girlfriend, Jessica, eating oysters, judging Bloody Mary’s and walking the Kosciuszko Bridge together. Colin is credited with assisting Gerrold Vincent receive a Guinness World Record for body suspension at the Ripley’s Believe It or Not museum in Times Square working as the piercer and rigger for the event. He ran live programming and performed backup vocals in the band No Survivors and rarely missed an opportunity to show up for his friends and fellow performers. Colin‘s insatiable drive to help and love others energized his most recent work as a street medic in the Black Lives Matter movement. He was passionately anti-facist and was recently interviewed by Elle Reeve of CNN News where he’s seen mask-on and megaphone in-hand calling for justice, hauling his medic kit through the streets of New York and picking up trash left behind. Colin was not just a light, but a blinding nuclear blast in the lives of the people who loved him. He leaves behind his adoring girlfriend of 2 and a half years, Jessica Rayo of Maspeth Queens, NY; his father, Bruce Cotter and stepmother Diane Cotter of Felton CA; sister, Kristen Cotter and brother in law Sean Slattery of Las Vegas, NV; sister, Dawne Martin and niece, Tessa Reagan of Stratham, NH; His aunt and uncle, Caryl and Robert Cotter, cousins, William Cotter and fiance Kamani, Ely Cotter and wife Nikki, all of the San Francisco Bay area; aunt, Judy Tarter of Beltsville, MD; aunt Diane Cotter of Lee, NH and godparents Pam and Kevin Seabrook of Copperopolis CA, his extended family and his amazing misfit collection of close friends whom he loved unabashedly and unconditionally. Colin joins his mother, Betsy and grandmother, Gaye, who preceded him in death in February of 2018 and May 2005, respectively. Colin Patrick will be interred beside his mother, Betsy, in Portsmouth, NH; date anticipated for the Spring of 2021. Colin’s virtual services will be held Sunday, September 27th, 2020, the evening before what would have been his 31st birthday. Instructions to access virtual services forthcoming. A tribute show in his honor will be organized in New York date TBD and circulated widely. Services open to all who loved him. In lieu of flowers, donations can be made to the National Education Alliance for Borderline Personality Disorder and the Black Lives Matter movement. Or scream into the abyss, because he would have liked that too.

Manhattan, NY - Colin Patrick Cotter was an epic force of chaotic-good until the witching hours of Friday, July 31st 2020. Colin&#8217;s life ended prematurely, not by any choice or design of his own and with deep sadness and shock from his... View Obituary & Service Information

The family of Colin P. Cotter created this Life Tributes page to make it easy to share your memories.

Send flowers to the Cotter family.