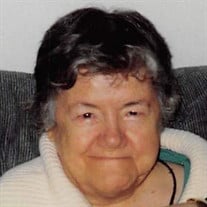 Haverhill – Constance “Connie” Fowler, 90, of Haverhill, passed away on Friday, June 23, 2017 at the Lakeview House Nursing Home in Haverhill where she resided the past 30 years. She was born in New Bedford, Mass., March 13, 1927. She was the daughter of the late Jules and Ada (Levasseur) Blanchette. Connie was the wife of the late Willard A. Fowler who predeceased her in 2009. She was loving and kind and had a great sense of humor. She was raised in Goffstown, NH and graduated from Goffstown High School. She enjoyed a lot of the activities at the Lakeview House Nursing Home, especially playing Bingo. She also enjoyed crocheting and assisting the staff with many of the activities. The staff and many residents at the nursing home were like family to her. Connie is survived by two daughters, Evelyn Jackman and her partner William Panetta, Arlene Giampa and her husband Glenn, four grandchildren, Dennis Cunningham, Henry Jackman, III, Michelle Crovetti and her husband Chad and Jason Jackman, four step-grandchildren, Sherri, Michael and Troy Giampa and Patti Doucette, four great grandchildren, Cody, Zachary, Tessa and Kassidy, six step-great grandchildren, Nicholas, Jesse, Jacqueline, Craig, Trisha and Katelyn, three step-great great grandchildren, Arabella, Georgio and Bretton, her sister, Marie “Pauline” Pinney, her brother, Gerard Blanchette and his wife Joy, many nieces, nephews and her family at the Lakeview House Nursing Home. In addition to her husband and parents, she was predeceased by her sister, Theresa Parkey, her sister-in-law, Nellie Lake, her brothers-in-law, Edward Lake, Sr., Peter Parkey and William Pinney. Her family would like to extend their heartfelt thank you to everyone at the Lakeview House Nursing Home and Compassionate Care Hospice, Woburn, Mass., for the wonderful care and support she received. A visiting hour will be held from 12 noon to 1 P.M. Saturday, July 1, 2017 at the Remick & Gendron Funeral Home-Crematory, 811 Lafayette Road, Hampton, NH with services immediately following at 1 P.M. in the funeral home. Burial will be in Long Hill Cemetery, Salisbury. Relatives and friends are respectfully invited. If desired memorial donations may be made in her name to either the Lakeview House Nursing Home c/o Activities, 87 Shattuck Street, Haverhill, MA 01830 or Compassionate Care Hospice, 800 West Cummings Park, Suite 3100, Woburn, MA 01801.

The family of Constance A. Fowler created this Life Tributes page to make it easy to share your memories.

Send flowers to the Fowler family.