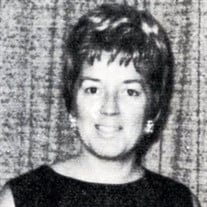 Hampton - Constance Paula Vogt, 86, of Hampton, passed away peacefully on Saturday, November 23, 2019 after a period of declining health. Connie's devoted and loving family was at her side. Connie shared over 62 years of marriage with her beloved husband, Lt. Col. John S Vogt. Connie was raised in Lowell, MA and graduated from St. Mary's High School in Lawrence. Connie went on to earn her nursing diploma from the former St. Joseph's School of Nursing of Lawrence. Upon Jack's graduation from Holy Cross and subsequent commission in the United States Marine Corps, they were married and lived all over the country while following Jack's career assignments. Connie lived a life of "Giving and Caring" through family, work, and her charities. She was very active in the Officer's Wives Club wherever they were assigned and also used her skills as a registered nurse by volunteering with the American Red Cross. For her efforts, Connie earned the Clara Barton Award for Meritorious Leadership, the highest award the Red Cross bestows. Always active in her church, Connie was a member of the Catholic Women's Club, the Monday Club and spearheaded the annual Church Craft Fair at Our Lady of the Miraculous Medal Church in Hampton. Upon retiring from the military and settling in Hampton, she continued her nursing career as charge nurse at Webster at Rye. In addition to her devoted husband Jack, Connie is survived by her son John Vogt of Bedford, her daughters, Judith Miller of Elizabeth City, NC and Mary Jane Morin and her husband, Peter, of Hampton. She also leaves her brother, Jack Lessard and his wife Bette of Hampton, her grandchildren, Danielle and Charles Miller, Westleigh and Andrew Morin and Darrien and Ashley Vogt as well as her great grandchildren, Jude, Maisie, Michael, Mia and Josephine and her sisters-in law, June and Dottie Lessard, both of Hampton. She was predeceased by her brothers, Patrick, William, Paul and Vic Lessard. Visitation will be from 3 to 5 PM on Friday, November 29, 2019 in the Remick & Gendron Funeral Home - Crematory, 811 Lafayette Rd., Hampton. A Mass of Christian Burial will be celebrated at 12 PM on Saturday at Our Lady of the Miraculous Medal Church, 289 Lafayette Rd., Hampton. Burial will follow in the High Street Cemetery. If desired, memorial donations may be made to The American Red Cross PO Box 37839, Boone, IA 50037-0839 .

Hampton - Constance Paula Vogt, 86, of Hampton, passed away peacefully on Saturday, November 23, 2019 after a period of declining health. Connie's devoted and loving family was at her side. Connie shared over 62 years of marriage with her beloved... View Obituary & Service Information

The family of Constance P. Vogt created this Life Tributes page to make it easy to share your memories.

Send flowers to the Vogt family.