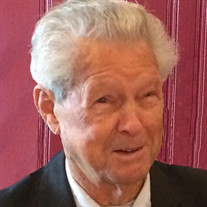 Seabrook – Corydon Fellows “Jim” Perkins Sr., 99, of Seabrook, passed away on February 2, 2021 at his home with Leukemia and related health issues. Corydon was born in Seabrook on October 5, 1921, a son of the late Corydon N. and Bernice (Caswell) Perkins. He was raised in Seabrook and was a very proud lifelong resident of that town. He married his beloved wife, the late Alice P. (Kamon) Perkins in 1941. Corydon enlisted in the United States Marine Corps the day after getting married and after his honorable discharge as a Marine Corps Sargent, returned to Seabrook and settled in the ancestral home built by his grandfather. Jim spent 4 years in the South Pacific from 1942 to 1946 in WWII. He was a hard-working man and had worked for Barr & Bloomfield Shoe Company for a number of years and later owned and operated Perkins Construction in the 1950s. He also worked as a self-employed clam shucker and enjoyed lobstering on the side. He was an avid card player and a regular at the old firehouse for the daily card games. Corydon was a proud veteran and a member of the Raymond E. Walton American Legion Post 70 of Seabrook. Jim was one of the best and had a huge heart. He loved his town, his family, friends, and strangers. He was always there to help. He went above and beyond for anyone, it didn’t matter to him. He was there at a moment’s notice no matter who it was. Above all else, Corydon loved spending time with all of his family, especially spending time with his fun-loving Perkins family. He came from a large family and he and his siblings were very close. He was the last survivor of them all. He particularly enjoyed the trips he took to Florida with them. They would all ride together in the big Suburban or a bus that they converted. There was never a dull moment with all of them together singing, laughing, pooling their money together to pay speeding tickets, and that list of fun times goes on and on. Surviving family members include his daughters, Joyce Addison and Candace Dow and, both of Seabrook. He also leaves many grandchildren, great grandchildren, and great great grandchildren, who adoringly referred to Corydon as their Dziadzu. In addition to his wife Alice, he was predeceased by his son Corydon Perkins Jr., his daughter Patricia Perkins, his brothers, Clarence, Johnny, Ernest and Harry Perkins and his sisters, Myrtie Butler, Pauline Eaton, Bessie Allard and Emma Knowles, and his 2 infant brothers named Clifford. Visitation will be held from 10 AM to 12 PM, Saturday, February 6, 2021 in the Remick & Gendron Funeral Home – Crematory, 811 Lafayette Road, Hampton. Services will immediately follow at 12 PM in the funeral home with burial in the Hillside Cemetery, Seabrook. In lieu of flowers, memorial donations may be made to the Seabrook Community Table, 18 Boynton Lane, Seabrook, NH 03874.

The family of Corydon F. "Jim" Perkins, Sr. created this Life Tributes page to make it easy to share your memories.