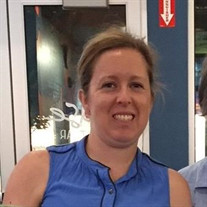 Rye – Courtney Rose Hickson, 36, of Chelsea, MA and formerly of Rye, passed away suddenly on Wednesday, February 7, 2018 from injuries sustained in an automobile accident. Courtney was born in Portsmouth on October 31, 1981, the daughter of Ralph and Cynthia (Jenkins) Hickson of Rye. She was raised in Rye, attended Rye schools and graduated from Portsmouth High School with the Class of 2000. Courtney’s interest in journalism started early as she served as co-editor of the Rye Junior High yearbook and as editor of the Portsmouth High News. She went on to earn her Bachelor’s Degrees in Journalism and Political Science from the University of Connecticut and while completing her double major, also served as Editor-in-Chief of the college newspaper, The Daily Campus, one of only two student managed college newspapers in the country. Upon graduation from UConn, Courtney did an internship at the Pentagon writing for Stars and Stripes,the US military newspaper, before taking a job with the former Share Group of Boston. She returned to school and earned her Juris Doctor and Master of Laws Degree from the University of NH while still managing to find time to complete an internship at the NH State House and serve as president of the Phi Alpha Delta Legal Fraternity. Courtney returned to the work force with American Tower Corporation of Woburn, MA before accepting a position with the Massachusetts Department of Telecommunications and Cable. Since living in Chelsea, MA, Courtney became active in politics and had recently interviewed for the City Planning Board. Courtney was an avid runner and a workout fanatic, taking boxing and spin classes and attending fitness boot camps. With some of her many diverse friends she often played trivia at local establishments and frequently won. In addition to her beloved parents, she is survived by her uncle Robert Hickson of Springfield, MA, her aunts, Ruth Barchard of St. Petersburg, FL and Regina Breglio of Springfield, MA and several dear cousins. She will be so sadly missed by her family and many friends. She was predeceased by her uncles, Richard, Raymond and Roger Hickson and her aunt, Rosemarie Eggleston. Friends may visit from 4 to 7 PM on Monday, February 12, 2018 in the Remick & Gendron Funeral Home – Crematory, 811 Lafayette Rd., Hampton. A Mass of Christian Burial will be celebrated at 11 AM on Tuesday at St. Theresa Parish, 815 Central Rd., Rye. All those attending the funeral mass are requested to go directly to the church. Burial will be private. Family flowers only but if desired, memorial donations may be made to a cause that Courtney staunchly supported, the Endometriosis Foundation of America at https://www.endofound.org/donation and/or just complete a random act of kindness while thinking of Courtney for someone you encounter during your day.

Rye &#8211; Courtney Rose Hickson, 36, of Chelsea, MA and formerly of Rye, passed away suddenly on Wednesday, February 7, 2018 from injuries sustained in an automobile accident. Courtney was born in Portsmouth on October 31, 1981, the daughter... View Obituary & Service Information

The family of Courtney R. Hickson created this Life Tributes page to make it easy to share your memories.

Send flowers to the Hickson family.