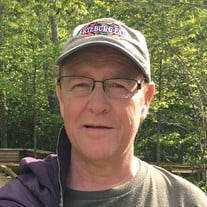 Rye – Donald Marshall Scott Robertson, 61, of Rye, passed away peacefully Saturday, January 25, 2020 at Dartmouth Hitchcock Medical Center in Lebanon, NH with family by his side. Scott was born in Ottawa, Canada March 20, 1958. His family relocated to downeast Maine where he was raised and attended schools in Steuben and Harrington, Maine as well as the University of Maine. He worked in sales most of his life and also did remodeling and carpentry. He made his home in Rye since 2007 and was a former resident of North Hampton and Greenland, NH. Scott loved living on the coast of Maine and New Hampshire. His interests included music, boating, antique cars, basketball, history and politics. He shared 21 years with his life partner Tara Gregorowicz of Rye. In addition to Tara he is survived by his son Douglass M. Robertson of Keene, NH, brothers, Stephen McInnis and his partner Jeanie Allen of Harrington, Maine, James Robertson and his wife Kandi of Harrington, Maine, step-mother Mary (Styles) Robertson of Harrington, Maine, former spouse Dina Dudarevitch of Kittery, Maine and several nieces and nephews. He was predeceased by both of his parents, Dr. Donald M. Robertson of Harrington, Maine and Beverly (Rice) Robertson of Ottawa, Ontario. Celebrations of life will be held in New Hampshire and Maine at dates to be announced. Burial will be private. In lieu of flowers or if desired, memorial contributions may be made to the New Hampshire SPCA

The family of D.M. Scott Robertson created this Life Tributes page to make it easy to share your memories.

Send flowers to the Robertson family.