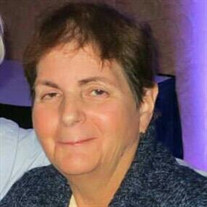 Dale Ann Perruzzi Dickerman Knowles - born at Lynn Hospital on Feb 3, 1955. According her baby book her mother wrote, "Dale never cried as a baby." She grew up in a loving family surrounded by relatives and friends. Dale went to St Mary s school in Lynn for grammar and high school and graduated in 1972 and was involved in many activities during her school years. Dale went to Salem State College where she earned her bachelors degree in education and Masters degree in Special Education. Salem State was also the place the Dale and Fred in a speech class where Dale put on a skit and Fred was smitten forever more, they served on the college senate together and began to date. It took Fred 10 years to get up the courage to make a commitment to ask Dale to marry him, she of course said yes. Dale and Fred were married on May 19, 1984, followed by the birth of their favorite daughter Kristine Knowles in July of 1985. Dale also took the time to work on her pilots license and flew a plane solo before deciding to devote her time to her family and favorite son Cal who was born in September 1988. The family spent summers camping in Naples, Maine. Always made more enjoyable by the fact cousin Keith Sullivan, wife Karen, Patrick and Molly became seasonal campers also. Through the many summers those were many happy fun-filled years, as the camping experience was enhanced by brother Mark Knowles and his wife Karen, children Christopher, Kelly and Meagan also becoming full time summer campers. Later joined by the Johnson and Lyons families up Maine where all the families took time to boat, float, beach, cook out, parade, balloon fests, outdoor drive-in movies and of course mountain climbing. When Dale was not busy camping, she was very busy working, raising a family, teaching, going to college, coaching special Olympics and taking care of her family that she loved so much. All was well in our family till June of 2008, when Dale received the diagnosis of CNS Lymphoma brain tumor. Then Dale showed everyone her true grit and determination in a triumph that was quite astounding. She came back from 3 months of hospital and rehab care, totally bedridden and unable to eat. Through Dale s hard work and the support of her family and friends Dale was able to walk, eat and enjoy life again. During those 8 years Dale did not let being confined to a wheel chair for transportation slow her down. Adventures to Florida, North Conway, camping, cookouts, concerts, birthdays holiday celebrations, going out to restaurants down the beach and nearby was all made possible by Dale, her family and friends. These good times continued up to January 2016 when the brain tumors made their return and by September of 2017 Dale was ready for eternal rest and peace and passed away peacefully at home with her family by her side. Dale leaves behind , as mentioned earlier, brother Mark Knowles and his family, cousin-in law Keith Sullivan and his family, Brother-in-law Jeff Knowles and wife Joann, Brother-in-law Brian Knowles and wife Trina and nieces Erika and Courtney. Cousin-in-law Ralph Sweeny and good friend Nancy and Michael and Will. Cousins Chery, Scott and Dane and Roy Perruzzi. and as mentioned earlier her Aunt and Uncle Deb and Dick Perruzzi and Shirley and Ken Perruzzi. Family members in Lynn, Michael, Nick and Danielle. Also very good and close friends Ellen Hoover Mosher, Connie Psaros, Roni Johnson, Carol Warner, and Fran and Pat Lynch all who remained by her side till the end. Dale will be Missed and always Loved. A Celebration of Dale’s life will be Thursday, September 28, at 5 pm in the Sea Glass Restaurant, 2nd floor, Salisbury Beach. Relatives, Friends and those who loved Dale are respectfully invited. Should folks be inclined, memorials in Dale’s name may be made to any of the following: Salisbury Beach Partnership, 98 Elm St, Salisbury 01952; Salisbury Council on Ageing, Hilton Center, 43 Lafayette Rd, Salisbury or Off of Dev, Dr. Eric Wong, BIDMC, 330 Brookline Ave, Boston 02215.

Dale Ann Perruzzi Dickerman Knowles - born at Lynn Hospital on Feb 3, 1955. According her baby book her mother wrote, "Dale never cried as a baby." She grew up in a loving family surrounded by relatives and friends. Dale went to St Mary s... View Obituary & Service Information

The family of Dale A. Knowles created this Life Tributes page to make it easy to share your memories.

Send flowers to the Knowles family.