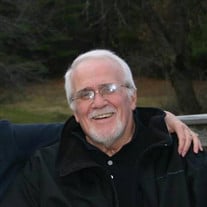 Rye, New Hampshire - Dallas “Buzz” Nathan Davenport, 76, peacefully passed away on Monday, July 18, 2016, surrounded by loved ones. Dallas entered the world in Akron, Ohio, on November 20, 1939, the first son of the late Eugene and Irene (Snader) Davenport. He was raised in Akron and graduated from Buchtel High School in 1957. Dallas worked his way through the University of Akron as a US Postal Worker, a carhop at the Flagpole Drive-in, and a piano-playing dynamite at honky-tonk bars on Howard Street. As a young adult, Buzz took to the stage in local musical theater and as part of a 4-piece rock-and-roll band. In 1965, his dancing shoes met their match in Paula Jean Cooper, of Mansfield, Ohio. They married in 1966. Dallas was a sales-man. In Ohio, he developed and marketed medical products for Faultless Rubber Company and later, for General Tire and Rubber Company. Dallas dramatically improved the products available to patients with ileostomies and colostomies. His position with General Tire brought him to New Hampshire, where he went on to work for Paul Revere selling life and disability products to professionals. In 1968, he and his wife discovered the draw of the ocean and moved to the seacoast where they would raise their family. When their children were still young, Buzz became a friend of Bill’s. That friendship lasted 37 years. Dallas’s risk-taking, entrepreneurial spirit led to his start-up of The Davenport Organisation, founded in 1978, and still existing today. Through this upstairs boutique, he designed one-of-a-kind jewelry pieces, dealt gems across the globe, and shared with the world the beauty of diamonds, fancy-colored diamonds, and colored sapphire. As his own boss, Buzz had the freedom to pursue his other passions as well. A wielder of words, he wrote the weekly column “Hard Alternatives” for The Hampton Union, published from 1981-1987. He attended services and sang in the choir at the United Church of Christ in North Hampton. For decades, he shared his inspirational singing at weddings and funerals, in the grocery store and his car, and with the seacoast’s own Funky Divas. Dallas spent the evenings and weekends of 20 years coaching his own children and the seacoast’s kids in soccer as well as in the art of TP-ing. Buzz was a teller of irreverent jokes and a playful flipper of “the bird,” all in the spirit of fun, and right up to his last hours on Earth. This year marks the 50th year of marriage for him and his wife. Dallas and Paula shared an enduring friendship, a unique attraction of the minds, a loyal partnership, and the sanctified secrets of over 50 years together. In addition to his wife, Buzz leaves his four children: Joshua Cooper Davenport and his wife Anna of Newmarket; Shannon Davenport Clifford and her husband Jamie of Hampton; Elijah Yoon Davenport and his wife Inkyung of Portsmouth; Isaac Eline Davenport and his wife Kristi of Kittery, Maine; six wacky grandchildren: Eloise, Caroline, Maitri, Moxie, Tatum and Aiden; two brothers, David Davenport and his wife Sandy of Norton, Ohio; Mark Davenport and his wife Robin of Wooster, Ohio; and a gaggle of in-laws, nieces, nephews, and friends. All beloved, of course. Visiting hours will be on Friday, August 5th, 2016 from 4-7 P.M. at the Remick & Gendron Funeral Home-Crematory, 811 Lafayette Road, Hampton, NH. Services will be held on Saturday, August 6th, 2016 at 11A.M. at the United Church of Christ, 295 Atlantic Avenue, North Hampton, NH. Relatives and friends are respectfully invited. In lieu of flowers, donations may be made to Shriners Hospitals for Children https://secure2.convio.net/shfc/site/Donation2?df_id=8427&8427.donation=form1&gclid=CPauyaTfp84CFcRkhgodAXoHcQ

The family of Dallas N. "Buzz" Davenport created this Life Tributes page to make it easy to share your memories.