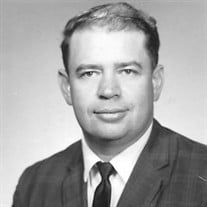 Hampton - Dr. Daniel S. Maloney, 92, of Hampton and formally of Winter Haven, FL, passed away peacefully on Thursday, May 21, 2020 at the Portsmouth Regional Hospital after a brief illness. He was born on February 3, 1928 in Quincy, MA, the son of the late Daniel A. and Margaret (Leary) Maloney of East Braintree, MA. He was the beloved husband of Alice (Sweezey) Maloney, formally of Braintree, MA and he and Alice recently celebrated 66 years of marriage together on February 6th. Dan was a graduate of Braintree High School and served his country honorably in the United States Army. He later graduated from Thayer Academy and earned both an undergraduate degree and a Master's Degree in Education from Springfield College. He continued to enhance his education credentials through studies at Boston University and as a John Hays Fellow at Williams College. Dan was a respected teacher, football and basketball coach and principal at Richmond High School in Richmond, ME for many years and then served as Principal at Winnacunnet High School in Hampton from 1960 to 1968. He was a role model for thousands of young people and earned wide recognition as a progressive and innovated educator. He was most proud that his students stayed in constant contact with him, be it a visit to the house, an invite to a golf tournament, or to cast a few lines at the fishing camp. As a teacher, coach and principal, Dan devoted his entire adult life to education. In 1968 he joined the New England Association of Schools and Colleges and was assigned the task of determining the need for a commission to evaluate and accredit technical and career schools and colleges. In December of 1970, the Commission on Vocational, Technical, Career Institution was established and he was appointed as its founding director. In 1992, he was recognized by the Board of Trustees of the New England Institute of Technology with the degree of Doctor of Humane letters, in Honoris Causa. Dan was also an avid golfer and he and Alice were 30 plus year members of Abenaqui Country Club in Rye where he once made it to the finals of the Club Championship. He sat on various golf committees and was most proud of his service as Abenaqui Club President from 1989-1990. He and Alice were also members of Lake Region Country Club and Cypress Woods Country Club of Winter Haven, FL where they wintered for 23 years. Dan was an avid Boston sports fan and could always be found wearing his Red Sox or Patriots hat and he especially enjoyed his many Red Sox spring training seasons in Winter Haven. He also loved his time with the boys at their hunting and fishing camp in Benedicta, Maine which he visited at every opportunity over the last 15 years. Steve and Shawn quickly put their Dad’s carpenter skills to work, insulating the newly built camp, finishing the rough board interior walls and building a catwalk which attached the upper lofts. He was very proud of the many close friends he made at the Benedicta camp. In addition to his parents, he was predeceased by his sister, Margaret Lake. Dan leaves his wife Alice and their three sons, D. Stephen Jr., Shawn Michael and Kevin Spencer and his companion Gay King all of Hampton, his 3 grandchildren, 2 great-grandchildren, brother-in-law, Bob Lake of Middletown, NY and his ever faithful "Jake," the German Shorthaired Pointer. He will be greatly missed by all that had the pleasure to have met and spend time with him. All services will be private.

Hampton - Dr. Daniel S. Maloney, 92, of Hampton and formally of Winter Haven, FL, passed away peacefully on Thursday, May 21, 2020 at the Portsmouth Regional Hospital after a brief illness. He was born on February 3, 1928 in Quincy, MA, the... View Obituary & Service Information

The family of Daniel S. Maloney created this Life Tributes page to make it easy to share your memories.

Send flowers to the Maloney family.