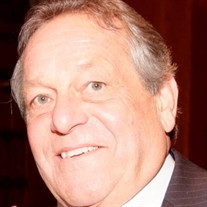 Hampton Falls – David P. Benoit, 75, of Hampton Falls, died Tuesday, October 27, 2020 at Portsmouth Regional Hospital after a period of failing health. He was born in Lawrence, MA April 3, 1945 the son of the late Philip and Ruth (Nimmo) Benoit. David was raised in the Lawrence / Methuen, MA area. He moved with his family to Halifax, VA where he graduated high school. He moved to NH in the 1970’s. He became a very successful developer, and some of his projects included Wellington Farms in Hampton Falls, moving the East School from center of Hampton Falls next to the Library, The Hampton Falls Inn and the Green House, as well as developments in Seabrook. He loved the seacoast area and his town. When David first came to NH he was a Hampton Beach Life Guard. He decided to get into building and development. He enjoyed his many fun cars, especially his 1962 Corvette. He was a helicopter pilot and a SCUBA diver. He worked hard and played hard. He was a great story teller and could remember every detail. He had a passion for fly fishing and fished in many places around the world. He spent the winter months in Argentina with his wife Georgina and would come home to Hampton Falls in the summer and enjoy his daily visits from his granddaughter. He will be missed by many. He leaves his wife Isabel (Tellez) “Georgina” Benoit of Hampton Falls, two daughters, Alexis Garrant and her husband Robert Garrant, II of Hampton Falls, Crystal Buckley of Florida, four grandchildren Abigail Garrant, Aria and Niko Pearson, Levi Buckley and his niece Florencia Tellez of Argentina. Visiting hours will be from 2-5 P.M. Sunday, November 1, 2020 at the Remick & Gendron Funeral Home-Crematory, 811 Lafayette Road, Hampton. Private burial will be in the West View Cemetery, Hampton Falls. In lieu of traditional remembrances, donations may be made to either, the Hampton Falls Volunteer Fire Department or the Hampton Falls Police Department, 3 Drinkwater Road, Hampton Falls, NH 03844.

The family of David P. Benoit created this Life Tributes page to make it easy to share your memories.

Send flowers to the Benoit family.