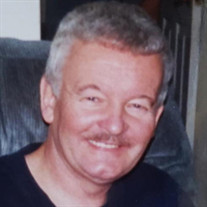 Franklin – David M. Gerlarneau, 75, of Franklin passed away peacefully on Sunday, October 11, 2020 at Concord Hospital with his children by his side. David was born on October 10, 1945 in Franklin, son of the late Annette R. (Gerlarneau) Archibald. David grew up in Franklin and attended St. Mary’s School and Franklin High School. He worked for Worldwide Dedicated Services as a truck driver before retiring in 2010. Dave, as many called him, was an expert driver and could easily handle anything on wheels, winning several tractor trailer driving contests and later, due to his driving expertise, became a judge for the events. Flying general aviation planes was a passion of Dave’s in the 70’s where he took flying lessons out of Laconia Municipal Airport and soloed many flights. Dave enjoyed music, motorcycles, classic cars, spending time at the beach and gatherings with friends and family. He is remembered by those he befriended as a kind gentleman who was always willing to lend a helping hand no matter what the circumstance. He enjoyed visits to Maine and travelled to Moosehead Lake and along the Maine coast often; his favorite and most relaxing place being Port Clyde. David is survived by his best friend and partner Jeanne (Maheu) Blake, his daughters Paula Lewis and husband Mitch of Sanbornton, Karen Colburn and husband Kent of Salisbury and his son, Frank Gerlarneau and wife Shelley of Franklin, his Aunt Gloria (Gerlarneau) Lavertu of Tilton, who is like a sister to him, his brothers Steve Archibald and wife Sharon of Sanbornton and Bill Archibald of Stratford, his Aunt Katherine (Ford) Gerlarneau of Moultonborough, four grandchildren, Dillon Raboin of Bristol, Maegan Raboin of Boston, MA, Kimberly Gerlarneau and Shawn Gerlarneau of Franklin, as well as many nieces and nephews. David is predeceased by his Uncles, Joseph Lavertu formerly of Tilton and Robert Gerlarneau formerly of Moultonborough whom he considered more like a brother. A celebration of David’s life will be held Saturday, October 24, 2020 beginning at 11 AM with a service following at noon at the Remick & Gendron Funeral Home-Crematory, 811 Lafayette Road, Hampton, NH. Masks are required and social distancing must be maintained. Burial will be private. In lieu of flowers, please consider a donation to the NH Humane Society 1305 Meredith Center Road, Laconia, NH 03246.

Franklin &#8211; David M. Gerlarneau, 75, of Franklin passed away peacefully on Sunday, October 11, 2020 at Concord Hospital with his children by his side. David was born on October 10, 1945 in Franklin, son of the late Annette R. (Gerlarneau)... View Obituary & Service Information

The family of David M. Gerlarneau created this Life Tributes page to make it easy to share your memories.

Send flowers to the Gerlarneau family.