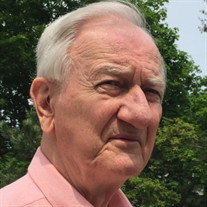 Exeter – David A. Holton, 82, of Exeter, passed away peacefully on Friday, April 10, 2020 at his home. David was born in Boston, MA on April 25, 1937, a son of the late Adolthus and Margaret (LeRoy) Holton. He shared 39 years of marriage with his late wife, Cynthia (Godsoe) Holton and leaves his life partner of over 17 years, Margaret “Meg” Cartwright of Exeter. David was raised in Warner, NH and graduated from Simonds High School of Warner with the Class of 1955. He went on to earn his Bachelor’s degree from Tufts University in 1960 where he was a member of the Phi Sigma Kappa Fraternity. David’s love of Antique cars became a passion of many years. He and Meg were members of the Stratham Seniors (“76ers”) Club and the Rye Club, Alive, Active and Over 55. They were also avid Bingo players and enjoyed the weekly games at the Exeter Senior Center. David played ukulele and banjo at a local club and he and Meg loved to travel, with many trips to Canada, Japan, Holland and Germany. In addition to Meg, David is survived by his children, Brooke Lunt of Manchester, Everett Godsoe of Alexandria, Nathaniel Palmer of Stuttgart, Germany and Stedman Holton of Concord. He also leaves his brother, Peter Holton and his wife, Karen, of Rockport, MA, his sister-in-law Julieth Holton, his 5 grandchildren, 1 great granddaughter and several nieces and nephews. David was also predeceased by his brother, Philip Holton. Services will be private. In lieu of flowers, memorial donations may be made to Rockingham VNA & Hospice 137 Epping Rd., Exeter, NH 03833 or to a charity of one's choice.

The family of David A. Holton created this Life Tributes page to make it easy to share your memories.

Send flowers to the Holton family.