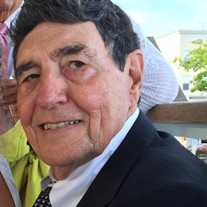 Exeter - David “Coach” O’Connor, 80, of Exeter, died June 15, 2018 at Hyder House after a lengthy and inspirational battle with cancer. Knowing that his days in this life were limited, he was granted the gift of time to spend a final winter in Bradenton, FL, to officiate at the wedding of his granddaughter, and to spend quality time with family and his many friends. David was proud of his six years of service in the US Coast Guard. An active member of the United Church of Christ in North Hampton, he served multiple terms on Church Council, sang in the choir, participated in the Men’s Breakfast group, and facilitated the most recent renovation of the sanctuary. He also served In the Hampton Rotary (President-Elect), Lion’s Club (President), as a board member at Seacoast Credit Union, and, subsequently, at Service Credit Union, ending his service as Chairman of the Loan Committee. He was also a long-standing member of the American Legion. Born the youngest of a large family in Salem, MA, he was involved in planning his high school class reunions for many years. An entrepreneur, he owned businesses in Marblehead, MA and Hampton, “Travel Connection”, and also worked at PSNH, and as a safety engineer at the Portsmouth Naval Shipyard and New England Homes. He still found time to pursue his love of travel, especially to Ireland, the Boston Red Sox, NE Patriots and golf. He is survived by his wife of 32 years, Joanne (Gagnon) O’Connor, daughters, Ellen (O’Connor) Cronauer and husband Greig, Lauren (Desrochers) Proto and husband Brian, and five “awesome” grandchildren: Whitney (Cronauer) Decker and husband Jason, Nathan Cronauer, and Zachary, Ethan and Keira Proto. He was predeceased by his son, David J. O’Connor. There will be no calling hours. A celebration of life, followed by a reception with light refreshments, will be held at 1:30 PM, Saturday, June 23 2018 at the United Church of Christ, North Hampton. Burial will be private. Family flowers only. If you wish, memorial donations may be made in David’s name to United Church of Christ, 295 Atlantic Avenue, North Hampton, NH 03862, Rockingham VNA & Hospice c/o Exeter Hospital or Hyder Family Hospice House Assistance with the arrangements was by the Remick & Gendron Funeral Home-Crematory, Hampton.

The family of David "Coach" O'Connor created this Life Tributes page to make it easy to share your memories.