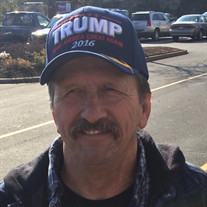 Hampton – David R. Porter, Sr., 75, of Hampton, died Saturday, January 11, 2020 at his home with his wife by his side after a period of failing health. He was born in Marlborough, MA February 3, 1944 one of eleven children to the late John A. and Bertha A. (Boulay) Porter. David was raised in Marlborough and attended Marlborough High School. He was a veteran serving with the US Army. A meat cutter by trade, Dave was employed by Shaw’s Supermarkets and worked in many stores retiring from the Plaistow store in 1998 due to failing health. He made his home in Hampton since 1989 coming from Woonsocket, RI. He enjoyed bowling, golfing, fishing and Marelli’s. He shared 41 years of marriage with his wife, Donna (Daniels) Porter. In addition to his wife, family members include three children Sharyn Mish and her husband Jeremy of Coral Springs, FL, David Porter, Jr., of The Woodlands, TX, Jeannine Porter of Los Angeles, CA, three grandchildren, Julia Mish, Hayley Porter and Ryan Porter, siblings John Jr., Allen, James and Mark Porter, Lorraine Poole, Mary Rickel, many nieces and nephews. In addition to his parents he was predeceased by siblings, Agnes Boutwell, Joan Collins, Robert and Charles Porter. Visiting hours will be from 4-6 P.M. Friday, January 17, 2020 at the Remick & Gendron Funeral Home-Crematory, 811 Lafayette Road, Hampton. Relatives and friends are respectfully invited. Per Dave’s wishes there will be only the gathering at the funeral home. Dave felt his celebration of life surprise party held in December of 2018 was what he wants everyone to remember. In lieu of traditional remembrances donations may be made to Shriners Hospital for Children

The family of David R. Porter Sr. created this Life Tributes page to make it easy to share your memories.

Send flowers to the Porter family.