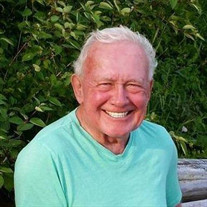 A Man With a Zest for Life West Yarmouth, MA - David W. Sides, 74 of West Yarmouth passed away at Cape Cod Hospital, Hyannis on March 5th, 2019. He died peacefully after a long and valiant struggle with ALS. He was born in Bridgeport, CT on August 3, 1944, the son of the late Elsie and William Sides. Dave’s early years were spent in Trumbull, CT until his family moved to Canada when he was 10. His time living in the Town of Mount Royale, Quebec shaped his life and sparked his love of hockey which he played with competitive zeal until the age of 70. He returned to the States at age 17, graduating from Roger Ludlow High School in Fairfield, CT in 1963. He earned a degree in English literature from Dartmouth College, Class of 1967. He was a member of the Dartmouth College Alumni Association, enjoying many fishing trips to the Dartmouth Land Grant with friends who remained loyal and supportive during his entire life. Upon graduation from college, Dave served in the U.S. Army as a 1st Lieutenant. He was an artillery instructor, forward observer and battery commander of “A” Battery, 83rd Artillery Battalion. His unit supported the 101st Airborne and Marine infantry units engaged in ground operations near the DMZ. While serving at Firebase Bastogne, in the northernmost sector of Vietnam, he was twice awarded the Bronze Star for distinguished service. Upon discharge from the Army, Dave entered the insurance industry where he would spend his entire career. Sales management was a natural fit for Dave’s outgoing and engaging personality. Although he spent his career as an insurance executive working for several major insurers, he often described his occupation as “fishing, with insurance as my hobby”. He was an enthusiastic and skilled fly fisherman and boat owner. The Bass River was his favorite place. Dave married Susan Hayes in 1975, the sister of his college room-mate. They shared 33 years of marriage until she passed away in 2008. He is survived by his cherished daughter Jessica Sides of St. George, UT. Jessie traveled back east frequently to her father’s side as his illness progressed. She was a joy to him and he loved her dearly. He is also survived by his beloved partner Marie Anderson of West Yarmouth. Dave and Marie shared many travels and adventures before he fell ill and she cared for him tirelessly during his illness. Marie’s family also adopted and supported Dave during his last years, bringing him great joy. Dave’s surviving family members include his sister Lynne Roming and brother-in-law Peter Roming of Loveland, Colorado, brother Tom Sides and sister-in-law Judy Sides of Scarborough, Maine, and his sister Nancy Trew-Sugden and her husband Jim Sugden of Southbury, Connecticut. He had close and loving relationships with his aunts and uncles, cousins, nieces and nephews especially his nephew Erin Trew whom he loved as a son. Dave’s love of adventure, sharp intellect, engaging personality and sparkling wit endeared him to many and he will be missed by all. The family extends their thanks to his caretakers, especially Karen Corcoran and Margaret Muse as well Marie’s son Adam Herr. Thanks are extended also to Bayada Home Health Care, the Visiting Nurse Assn. and the Mass General and VA Providence ALS Clinics for their compassionate care. Services for David will take place in Hampton, NH on August 2nd and 3rd. Visiting hours are scheduled from 6-8 P.M. Friday August 2, 2019 at the Remick & Gendron Funeral Home-Crematory, 811 Lafayette Road, Hampton, NH. A remembrance service is scheduled at 10 A.M. Saturday August 3, 2019 at 10:00 am at the First Congregational Church, 127 Winnacunnet Road, Hampton, NH, where Dave was a member of the choir until his move to West Yarmouth. Interment at Hampton Cemetery will follow the remembrance service. All services will be open to the public. In lieu of flowers, donations may be made to the ALS Association, P.O. Box 37022, Boone, IA 50037 or www.alsa.org.

A Man With a Zest for Life West Yarmouth, MA - David W. Sides, 74 of West Yarmouth passed away at Cape Cod Hospital, Hyannis on March 5th, 2019. He died peacefully after a long and valiant struggle with ALS. He was born in Bridgeport, CT... View Obituary & Service Information

The family of David W. Sides created this Life Tributes page to make it easy to share your memories.

A Man With a Zest for Life

Send flowers to the Sides family.