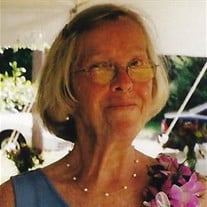 Rye - Dawn Lucille Farrar Ayer, 90, of Rye, New Hampshire, formerly of Hampton, departed this world peacefully on Thursday, May 23, 2019 at Webster at Rye. She was born April 6, 1929 in Haverhill, MA, the daughter of the late Edward and Hazel (Neily) Farrar. Dawn graduated from Groveland High School, Groveland, MA, as the Salutatorian of her Class of 1947, and attended Bryant & Stratton business school in Boston. She moved to Hampton from Victor, New York in 1994 after spending almost forty years in numerous locations in New York State, turning houses into homes for her constantly growing family wherever she went. She had been a resident of Webster at Rye since 2017. Dawn enjoyed crossword puzzles, walking, cooking, and running the merry race of life with her family and friends. She was an enthusiastic member of Trinity Episcopal Church in Hampton. Dawn was predeceased by Charles W. Ayer, Sr., her beloved husband of 52 years until his passing in 2003. She was also predeceased by her cherished youngest son, Robert W. Ayer in 2009, and her dear older brother, Welton Farrar of Dallas, PA, in 2018. Dawn and Welton had a wonderful time at Welton’s 95th birthday party, entertaining the guests with their countless stories and their rousing version of “Little Bobby Shaftoe.” She will also be reunited in the next world with her treasured cat, Ralph, who devoted his long life to her care. Family members include her five surviving children, Rebecca Lennahan and her husband Patrick of Portsmouth, RI; Charles W. Ayer, Jr. and his wife Claudia of Vernon, CT; John Ayer and his wife Jan of Marlborough, CT; Susan Ayer of Seabrook, NH; James Ayer and his wife Diana of Washington Township, MI, as well as16 grandchildren and 9 great-grandchildren. She is also survived by her dear friend and devoted companion, Patrick Fitzgerald of Rye, NH. The family would like to express its profound thanks to the caring staff of Webster at Rye, too numerous to name but too wonderful to forget, who made Mom’s last years not just bearable, but joyful and meaningful as well. There is simply no way to convey our gratitude adequately. A memorial service honoring Dawn’s life and celebrating God’s blessings will be held on Sunday June 16, 2019 at 1:30 PM at Trinity Episcopal Church, 200 High Street, Hampton. Relatives and friends are cordially invited. Interment will be in Pine Grove Cemetery, Salem, NH. In lieu of flowers, donations may be given in Dawn’s name to Trinity Episcopal Church.

Rye - Dawn Lucille Farrar Ayer, 90, of Rye, New Hampshire, formerly of Hampton, departed this world peacefully on Thursday, May 23, 2019 at Webster at Rye. She was born April 6, 1929 in Haverhill, MA, the daughter of the late Edward and Hazel... View Obituary & Service Information

The family of Dawn L. Ayer created this Life Tributes page to make it easy to share your memories.

Send flowers to the Ayer family.