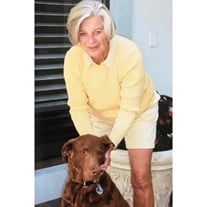 New London - Dawn Perry Carter of New London, New Hampshire died on June 8, 2020 at home with her family. Dawn was born on March 28, 1937 to Jane (Keegan) Perry and Donald Perry of Easton, ME. She was raised by her mother and step-father Andrew Cahalane in Old Orchard Beach, ME where she graduated high school. Dawn went on to Maine Medical School of Nursing in Portland, ME where she graduated and passed the State Boards to become a Registered Nurse in 1958. She was hired by American Airlines and trained as a stewardess at their new college in Fort Worth, TX and was based out of New York City in 1959 and 1960. Dawn returned to her nursing career at Quincy City Hospital in Quincy, MA where she met her husband, Robert Guild Carter. They were married in 1961 and lived in Branford, CT. Dawn worked briefly at Yale New Haven Hospital until becoming a full-time mother and housewife and active volunteer in the community with the PTA, the Women’s Club, the American Red Cross Bloodmobile, and Hospice when it first came to the United States from England. The family moved to Wellesley Hills, MA in 1978 and then to West Hartford, CT in 1982. The constant that remained throughout this time was the family ski house in New London, NH. Dawn and her husband retired to New London in 1987 on Little Lake Sunapee and then to The Seasons at the Lake Sunapee Country Club. She continued her volunteer work with the American Red Cross, the Council on Aging and Meals on Wheels. She and her husband spent winters at their home at Piper’s Landing in Palm City, FL. Over the years Dawn enjoyed tennis and golf with her friends as a member of the Pine Orchard Yacht and Country Club, Lake Sunapee Country Club, King Ridge Racquet Club, and Piper’s Landing Yacht and Country Club. Dawn was predeceased by her husband Robert in 2007. She leaves a daughter, Heidi Carter Milardo and her husband Joseph of Rye, NH and a son, Andrew Carter and his wife Michelle of Alton, NH. She leaves grandchildren Morgan Milardo Schermerhorn and her husband Kyle of Lowell, MA, Lucas Milardo and his fiancé Maddey of Bath, ME, and Keegan Carter and his fiancé Christa of Burlington, VT. She also leaves a great grandson, Theo Schermerhorn. All services will be private.

New London - Dawn Perry Carter of New London, New Hampshire died on June 8, 2020 at home with her family. Dawn was born on March 28, 1937 to Jane (Keegan) Perry and Donald Perry of Easton, ME. She was raised by her mother and step-father Andrew... View Obituary & Service Information

The family of Dawn M. Carter created this Life Tributes page to make it easy to share your memories.