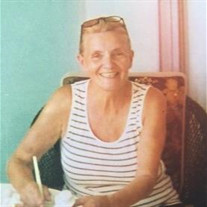 Hampton Falls - Deanna “Dee” O. (Wentworth) Barker, 78, of Sarasota, FL and Waterboro, ME, passed away peacefully, surrounded by her family, on Friday, March 25, 2016 at her son’s home in Hampton Falls. She was born in Littleton on February 1, 1938, the daughter of the late Harriet (Smith) Kruger and John Wentworth. Dee retired from Fairchild Semiconductor of South Portland, ME in 2000. She was employed at Palm Aire Golf Club of Sarasota for the past 7 years and loved driving to work in her golf cart, courtesy of Ranger Rick (her boss and other (Florida) son, as she referred to him). Dee took pride in serving the members of Palm Aire and she too, was very special to them. She always had a smile on her face when she was there or spoke of the members and co-workers of Palm Aire. She enjoyed sewing, knitting, plants, puzzles, reading, trips to Las Vegas and loved watching Big Papi play when the Red Sox would play in the spring in Fort Meyers. Dee also treasured summers at her home on Little Ossipee Lake in Waterboro, ME. Dee was a long time member and volunteer of The Eagles, American Legion, Elks and the Moose Club in Portland, ME and Bradenton, FL. She is survived by her partner, Vincent McKenna of Sarasota, FL, her five children, Thomas Dutil and wife Melissa of Hampton Falls, Cynthia Pettersen and husband Steven of Limerick, ME, Patricia Dutil of Acton, ME, Laurette Dutil of Casco, ME and Catherine Spencer and husband Shawn of North Berwick, ME. She also leaves her 13 grandchildren, 17 great grandchildren and her brother Richard Wentworth. She was predeceased by her grandson, Adam Spencer and her brother, Bruce Wentworth. A graveside memorial service will be held at 11 am on Saturday, May 7th in the Pine Grove South Cemetery on West Road in Waterboro, ME. Lunch in her honor will follow at the Oak Street Bistro in Alfred, ME. In lieu of flowers, donations may be made to the Waterboro Historical Society, PO Box 498, North Waterboro, ME 04061.

The family of Deanna "Dee" O. Barker created this Life Tributes page to make it easy to share your memories.

Send flowers to the Barker family.