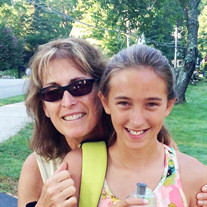 Hampton - Debra Jean Littlefield, 58, of Hampton, passed away on July 31, 2019. She was born in Newburyport, MA January 27, 1961, the daughter of the late Robert F. and Velma M. (Ackerman) Littlefield. Debra was raised in Seabrook on the harbor where her family was prominent in the fishing community. She graduated from Winnacunnet High School with the Class of 1979. She received her Bachelor of Science degree from the University of New Hampshire in 1983, where she met her lifelong friends of the Alpha Xi Delta Sorority. Deb was employed by Lamprey Health in account services in the Newmarket office for over 19 years. Those who knew Deb, knew that her daughter Elle was the light of her life. Deb was at her happiest when she was with Elle. She was active with the Seacoast Running Club where she fostered many great friendships. Deb was able to pass on her love of running to her daughter. As a coach for Girls on the Run, she had a special bond with Elle's friends and their families. In addition to her daughter Elle, she is survived by her brother Charles "Chuck" Littlefield, his wife Susan and their children Andre and Rob, aunts, uncles and cousins. She is survived by her extended family, Leslie, Michael, Meaghan and Bryan Lafond. Both Deb and Elle have been cherished members of the Lafond/Russell families. A celebration of life will be held at 1pm Saturday August 10, 2019 at the Remick & Gendron Funeral Home-Crematory, 811 Lafayette Road, Hampton. Family and friends are invited to come and share their favorite stories and memories of Deb. A book will be provided where those in attendance are able to leave a note of positivity for her daughter, Elle. In lieu of flowers, donations may be made to the Elle Littlefield Trust, c/o Newburyport Bank, 321 Lafayette Road, Hampton, NH 03842.

Hampton - Debra Jean Littlefield, 58, of Hampton, passed away on July 31, 2019. She was born in Newburyport, MA January 27, 1961, the daughter of the late Robert F. and Velma M. (Ackerman) Littlefield. Debra was raised in Seabrook on the harbor... View Obituary & Service Information

The family of Debra Jean Littlefield created this Life Tributes page to make it easy to share your memories.