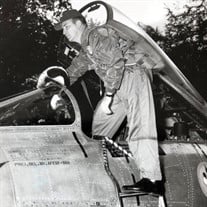 Hampton - The family of Denis McCarthy Kilroy is immensely sad to announce his passing on April 10, 2020. Denis passed away peacefully in his home with his wife, Diana at his side. Denis' life began on June 24, 1931. He grew up in Laconia, NH with his mom, Mary and sister Joanna (Miller). He developed a strong work ethic early on, earning enough money from his paper route to buy his own bike and practicing long and hard to be the best pitcher and first baseman he could be. This work ethic continued throughout his years at UNH where he studied history and earned a spot on the Wildcat baseball team (captain 2 years), while still finding time to be a tried and true member of Sigma Alpha Epsilon. Upon completion of his degree, Denis joined the Air Force where he not only became a fighter pilot but also a squadron leader, flight instructor and Air Division Chief of Safety as his final assignment. He left the Air Force after 12 years to become a pilot for American Airlines, rising quickly to the rank of captain, where he continued to serve as an example of excellence to his crew members until his retirement in 1991, flying his last flight on his birthday. His excellence as an airman was recognized by Allied Pilots' Association where he was asked to serve as accident investigator prior to his retirement. Never satisfied with a challenge unmet, Denis dipped his toe into minor league baseball, served as a volunteer member for North Hampton EMS, and served as computer science teacher at Sacred Heart School for 8 years where he started the computer program and was honored with the lab being named after him. With all his accomplishments professionally, Denis's most important full time job throughout his life was being a loving father and husband, mentor, coach and memory keeper for all of his children. He was an award winning photographer, including being credited with a rising band's album cover photo. He painstakingly captured every moment of our family's history and taught us all how to blow out birthday candles without blowing out the birthday candles. Throughout his life, Denis avidly collected stamps and coins sharing this love with his children with trips to the post office to ensure he acquired plate blocks on their first day of issue. He also spent many hours on the greens perfecting his other love, golf and for a lefty, he swung a mean club. Denis will be remembered for his wonderful sense of humor and so much more and will be sadly missed by his wife, Diana and their children, Moira and Thomas (Erika) as well as his children with Lois (Marcou), Lauren Anton (Bob), Patricia Kilroy, Jon Kilroy(Laura), Mark Kilroy (Melanie), Victoria Kilroy (Peter), Stephen Kilroy (Jennifer). Denis was a wonderfully loving grandfather to 14 (and great-grandfather to 4) who will carry with them joyful memories of time spent with this wonderful man. Denis' wish was for his family to gather and celebrate his life with many shared laughs and memories rather than a traditional funeral. If you wish to honor Denis in your own way please feel free to make a donation to the charity of your choice in his name. "Grieve not nor speak of me with tears but laugh and talk of me as if I were beside you..."

Hampton - The family of Denis McCarthy Kilroy is immensely sad to announce his passing on April 10, 2020. Denis passed away peacefully in his home with his wife, Diana at his side. Denis' life began on June 24, 1931. He grew up in Laconia,... View Obituary & Service Information

The family of Denis McCarthy Kilroy created this Life Tributes page to make it easy to share your memories.

Hampton - The family of Denis McCarthy Kilroy is immensely sad...

Send flowers to the Kilroy family.