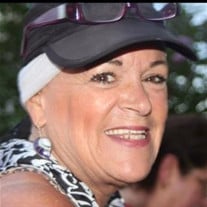 Hampton - Denise Theresa Chiavaras, 56, of Hampton, died Monday, January 11, 2016 at her home surrounded by her loving family. She was born November 3, 1959 in Manchester, daughter of the late Walter and Theresa (Fitzpatrick) Buckley. Raised in Manchester, Denise graduated from Manchester Central High School, Class of 1977. For nearly two decades, she was a highly successful Diamond Sales Manager at Kay's and Nassar Diamonds. Denise passionately lived and loved life. Whether traveling or supporting her beloved Patriots, she lit up a room, welcomed everyone and spread joy. Her true love was her devoted husband of eleven years, George Chiavaras. In addition to George, family members include two sons, Robert O'Neill of Hampton, Patrick O'Neill and his wife Ashley of Plaistow; two grandchildren, Kylee and Jackson O'Neill; her sister, Constance Beaudoin of Manchester; her brothers, Michael Buckley of Hampton, Patrick Buckley of Cape Coral, FL; and many loving nieces and nephews. Visiting hours will be from 4-8 pm, Friday, January 15, 2016 at the Remick & Gendron Funeral Home-Crematory, 811 Lafayette Road, Hampton. Services will be held at 10 am, Saturday January 16, 2016 in the funeral home.

The family of Denise T. Chiavaras created this Life Tributes page to make it easy to share your memories.

Send flowers to the Chiavaras family.