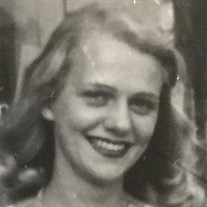 Seabrook Beach - Diana Claire Wedel Riley of Ocean Boulevard, died August 30, 2015, at her home in Seabrook Beach, New Hampshire, following a lengthy illness. Mrs. Riley was born on September 4, 1928. She was the second of four children born to the late Helen Cleary and Paul John Wedel in Elizabeth, New Jersey. She was the sister of the late Paul G. Wedel, Peter J. Wedel, and Joan Wedel. She grew up in Maplewood, New Jersey, and later moved to Alexandria, Virginia. There she attended high school and earned her diploma early. Diana was the beloved and devoted wife for 56 years of John (Jack) Joseph Riley, Jr., before he predeceased her in June 2007. Diana was a graduate of William and Mary College in Williamsburg, VA, where she met her husband. Before getting married, she worked for a period of time at the Pentagon. After starting as a receptionist, she was promoted to a photo interpreter. She and Jack enjoyed traveling around the country while he was in the service. They later moved back to New England, and raised their family in Lynnfield, MA, where they enjoyed many long-term friendships. Diana and her husband were especially fond of the coast. Since they were a young couple, they looked forward to spending every summer with their four children and pets at their beach house in New Hampshire. Later on, Diana also looked forward to winters in Singer Island, FL, in the company of family and numerous friends. Diana is survived by her daughter and son-in-law, Helen D. Riley and Kevin R. Nicholson of Beverly, MA; her daughter and son-in-law, Ann C. and Greg J. Schaldenbrand of Irmo, S.C.; her son, John J. Riley, III, of Amesbury, MA; and her youngest son, Peter A. Riley, of Seabrook Beach, NH. She has five grandchildren: Eleanor Riley Fulmer, Rose Corinne Murray, Isaac Caleb Cushing, Anna Elizabeth Schaldenbrand, and Owen Patrick Riley. As well, Diana has ten great grandchildren, all of whom are in South Carolina: Katie, Trey, Riley, Avery, and Ellie Fulmer; Jesse and Corinne Murray; and Caleb, Isabella, and Julian Cushing. She is the sister-in-law of Jean M. Wedel of PA; and of Vergie K. Wedel of TN. She was also the loving and close sister-in-law of the late Nancy (Riley) Walsh and Richard L. Walsh, Jr. of RI. Diana is the aunt of Richard L. Walsh, III, of RI; John J. Walsh of MA; James P. Walsh of MA; Dana L. Wedel of CA; Laurie A. Wedel of PA; Paul J. Wedel of CA; Kurt F. Wedel of CA; Peter J. Wedel of GA; Mark E. Wedel of TN; and Sheri D. Wedel of TN. She is also survived by many loving great nieces and nephews. Visiting hours will be held from 6 to 8 PM on Thursday, September 3, 2015 in the Remick & Gendron Funeral Home, 811 Lafayette Road, Hampton, NH. A Mass of Christian Burial will be celebrated at 11 AM on Friday, September 4, 2015 at St. Maria Goretti’s Parish, 112 Chestnut St., Lynnfield, MA, Burial will immediately follow in the Forest Hill Cemetery, Lynnfield, MA. In lieu of flowers, donations to St. Maria Goretti’s Parish in Lynnfield would be appreciated.

The family of Diana W. Riley created this Life Tributes page to make it easy to share your memories.