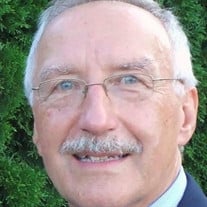 North Hampton - Dietrich “Dieter” Ebert passed away at home August 15, 2020 after a four month struggle with a brain tumor. He was born on September 11, 1941 in Munich, Germany where he was raised and educated. Dieter is survived by his wife of 47 years and best friend, Kathie (Andrews) Ebert, his son Dieter and Rachel (Lupoli) of North Hampton, his daughter, Renata and Noah Baieve of San Diego, his siblings, Baebel, Eva, Hermann and Hans Heinz, all living in Germany. He will always be OPA to his cherished grandchildren, Alexa and Tyler Ebert of North Hampton. Dieter is predeceased by his parents Hans and Paula Ebert and in-laws Theodore and Marion Andrews. Dieter met and fell in love with Kathie Andrews in 1969 in Munich and were married in 1972 in Wolfratshausen, Germany. They crossed the Atlantic Ocean on a container freighter in 1973 and settled in North Hampton. Dieter was a Mechanical Engineer and worked for MAN and a technical institute in Germany. In the US he worked for Hampton Machine, Kingston Warren and Profile Metal Forming where he was still employed as a consultant. Dieter was passionate about energy conservation, alternative energy sources and physical fitness. He was an innovator and inventor, always searching for a better resolution to everyday problems. Dieter treasured every second of his time spent at the family camp on Ossipee Lake, swimming, waterskiing, sailing, kayaking, hiking and snow-skiing. He was a kind and gentle soul who will be missed by all who knew him. Services will be private. In lieu of flowers, memorial donations may be made to the Rockingham County VNA & Hospice or the North Hampton Fire Department.

North Hampton - Dietrich &#8220;Dieter&#8221; Ebert passed away at home August 15, 2020 after a four month struggle with a brain tumor. He was born on September 11, 1941 in Munich, Germany where he was raised and educated. Dieter is survived... View Obituary & Service Information

The family of Dietrich H. Ebert created this Life Tributes page to make it easy to share your memories.

Send flowers to the Ebert family.