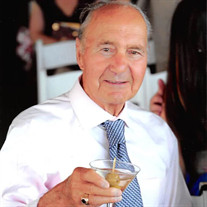 Seabrook - Domenic D. Rosa Of Seabrook Beach passed away peacefully at home surrounded by his loving family on Wednesday, July 8, 2020. He was born and raised in Cambridge, MA on March 1,1926, the son of Michael and Antoinette (Capodilupo) Rosa. In Dom’s own words: His parents were immigrants from southern Italy. He had four brothers and two sisters, and everyone worked. Those were the days of the Great Depression. “Dad worked in a piano factory during the day and an upholstery factory at night. I sold papers, shined shoes… I did just about anything to make a buck. Education was very important in my family. I must have done something right because I managed to earn a one-year scholarship to Harvard.” Before Mr. Rosa could put one foot inside those hallowed halls, World War II broke out. “My buddies and I were gung-ho about joining the army. Just before I signed the papers, I made a snap decision to join the Navy Air Force. I wanted to be a pilot. I was sent to Holy Cross college, then Williams college and finally the University of North Carolina to become a pilot. Before I could finish, the Navy decided it needed navigators, so I was sent to school in Maine and later Hawaii. The war ended, and I returned home.” “I met my beautiful wife of 70 years, Geraldine (Nugent) Rosa and soon after had a baby, the first of nine.” “America went back to war with Korea and I was called back into the service. My job was to help repair the damage done to three aircraft carriers during World War II. I was a Lieutenant JG. I took up boxing and I guess I was pretty good because I became the squadron champ.” Returning to Boston, Mr. Rosa took advantage of the G.I. Bill and went on to graduate from Harvard, with a degree in political science. Mr. Rosa needed to provide for his family, so he went to work for RadioShack as a salesman, calling on electronic manufacturing companies. “I was observant. I saw the mistakes various electronic companies were making and I knew how to avoid them. I borrowed $3000 from my father and started R&D Electronics. I subsequently created Pacer Electronics. I named it Pacer electronics because I like to watch the horses. We became very successful. I say WE because it was a family business. I relied on my kids to make it work. Ultimately Pacer went on to have offices in Connecticut, Florida, New York, Texas, Arizona, North Carolina, California and several overseas.” An entrepreneur at heart, he was always looking for the next opportunity. In addition to R&D Electronics and Pacer Electronics, Mr. Rosa started numerous electronic component companies including JV Electronics, PCA, Spartan and many other companies. Domenic Rosa was a well-known and respected giant in the electronics industry. In addition, he went on to own several bars, hotels, houses, car dealerships and restaurants. His love of horses and a little convincing from his wife, lead him to his next endeavor, racehorses; which he named after his children and grandchildren. He ultimately became part owner of Suffolk Downs. Eventually Domenic decided it was time to slow down, so he started selling his various businesses. He wanted to enjoy his family and watch the ocean from his home in Seabrook Beach. He was an avid runner, handball and tennis player, who enjoyed lifting weights and exercising up to his last days. Above all, he was a kind and compassionate gentleman and leader. He led with a kind heart and ruled with an iron fist, all with the ultimate combination of strength, wisdom, generosity and kindness. He helped many people, never left them wanting. The world could use many more like him! Dom was a shrewd negotiator, we can only imagine, at the gates of heaven he paid for the garden apartment, but he’s living in the penthouse, deservedly so. Heaven is lucky to have him, a true saint among men. He is sorely missed. In addition to his wife Gerry , family members include his nine children Michael Rosa and his wife Laura, Donna Burke and her husband George, Mark Rosa and his wife Cyndi, Kim Rosa , Joanne Trocki and her husband Edward, Judy Rosa, Charles Rosa and his wife Mary, Cynthia Rosa, Thomas Rosa and his wife Gail; 31 grandchildren and nine great grandchildren. Due to the pandemic all services will be private. In lieu of flowers donations may be made to the Alzheimers Association, 225 N. Michigan Ave., Fl. 17, Chicago, IL 60601.

Seabrook - Domenic D. Rosa Of Seabrook Beach passed away peacefully at home surrounded by his loving family on Wednesday, July 8, 2020. He was born and raised in Cambridge, MA on March 1,1926, the son of Michael and Antoinette (Capodilupo)... View Obituary & Service Information

The family of Domenic D. Rosa created this Life Tributes page to make it easy to share your memories.

Send flowers to the Rosa family.