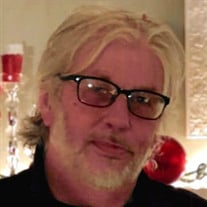 Hampton – Donald E. Lewis, 68, of Hampton, died suddenly on Thursday, June 4, 2020. He was born in Kittery, ME on June 29, 1951 a son of Lois J (Sloban) Lewis who now resides in Seabrook, NH and the late Donald K. Lewis. Raised in Keene and Hampton he attended schools in Keene, Winnacunnet High School as well as Merrimack College. At the age of 18 he married the love of his life and wife of 49 years, Dianne (Curtis) Lewis and together they moved to Colorado, where they owned and operated Planet Earth Collectibles. In 2013 they returned to Hampton to be close to family. Donald was a devoted member of the Portsmouth SDA Church as well as many other churches over the past couple decades. He was a lifelong musician, particularly loved playing the bass guitar and was a technology enthusiast who thrived on the latest innovations. He enjoyed riding his bike along the seacoast, but most of all he enjoyed spending time with his family and friends, especially his grandchildren. He would spend hours in the morning and night recording his music that he was so passionate about as well as finding ways for helping others in need. In addition to his mother and wife, surviving family members include his 2 sons, Jason Lewis and his wife Kathy of Hampton and Jeremy Lewis of Littleton, CO; 2 grandchildren, Alicia Lewis and Nathan Lewis and several nieces and nephews. Visiting hours will be held from 4-7 PM on Tuesday, June 9, 2020 in the Remick & Gendron Funeral Home-Crematory, 811 Lafayette Road, Hampton. Visitors should be aware that a limited number of people will be allowed in the funeral home at one time. Social distancing must be practiced and masks will be mandatory. A private celebration of life will be held at a later date. In lieu of flowers, donations may be made to the ADRA , 12501 Old Columbia Pike, Silver Spring, MD 20904.

The family of Donald E. Lewis created this Life Tributes page to make it easy to share your memories.

Send flowers to the Lewis family.