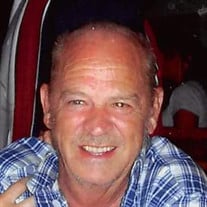 Seabrook - Donald A. Perkins, Sr., 83, of Seabrook, passed away suddenly on Sunday, January 6, 2019 at the Portsmouth Regional Hospital surrounded by his loving and devoted family. Don was born in Seabrook on October 8, 1935, a son of the late Clarence and Helen Perkins. Don was a lifelong resident of Seabrook. He was the loving husband of Rita Marie (Kelleher) Perkins for over 60 years and a devoted father to their eight children. He was employed at Bailey Corporation for many years and enjoyed digging clams with his kids and fishing in the Hampton River. His favorite part of the day was taking early morning rides along the beach and watching the sunrise with Rita, the love of his life, while listening to country music and sipping their Dunkin’s coffees. He also enjoyed playing 45’s every morning with the regulars. He had a passion for nice trucks and wouldn’t miss the opportunity to burn a little rubber up a back road. He was a selfless man who would always put other’s needs in front of his own. Don was one of the kindest people you would ever meet and will be so dearly missed by his family, friends and everyone who knew him especially his love of his life Rita she will be lost without him. He was predeceased by his brothers Clarence Jr. Perkins and Carl Bergeron, daughter Cynthia Sodoyer and grandson Jonathan Jones. He is survived by his wife Rita, his sons: Donald Jr., Steve, Kevin, Ricky and Francis Perkins, his daughters; Carol Nichols and Helyn Perkins, his brother Harry Perkins and his sisters, Kathrine Neadeau and Amy Fowler and her husband, Leo. Also left to cherish his memory are his 38 grandchildren and great grandchildren, and many nieces, nephews, cousins and friends. Visiting hours will be held from 4 to 6 PM on Saturday, January 12, 2019 in the Remick & Gendron Funeral Home-Crematory, 811 Lafayette Road, Hampton. A memorial service will follow the visitation starting at 6 PM in the funeral home and burial will be private.

Seabrook - Donald A. Perkins, Sr., 83, of Seabrook, passed away suddenly on Sunday, January 6, 2019 at the Portsmouth Regional Hospital surrounded by his loving and devoted family. Don was born in Seabrook on October 8, 1935, a son of the... View Obituary & Service Information

The family of Donald A. Perkins created this Life Tributes page to make it easy to share your memories.