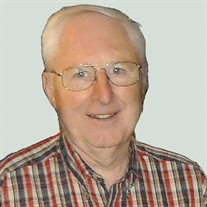 Portsmouth – Donat Robert Veilleux, a longtime resident of Hampton, passed away on Monday, February 8, 2016 at the Edgewood Centre, Portsmouth. He was born on November 16, 1932, in Lewiston, ME, a son of the late Dolor and Anita (Rousseau) Veilleux. Raised in Lewiston, he graduated from Lewiston High School with the Class of 1951. Following graduation, he enlisted in the United States Navy where he proudly served for 4 years aboard the USS Dashiell as a boiler tech. Mr. Veilleux returned to Lewiston after his time in the Navy, where he started his career in textiles for the Milliken Company, first working in Lisbon Falls, ME from 1954-1965, then Blacksburg, SC. The family lived in Shelby, NC for 4 years, before moving to Hampton in 1969. He continued his Milliken career in Exeter until 1982. He later worked at J.D. Cahill Co., Inc., in Hampton from 1982 until 1995, thereafter retiring. Don enjoyed coin collecting, crossword puzzles and various types of woodworking, including building desks, chairs and airplanes that he donated to The Richie McFarland Children’s Center. Family members include his sons, Thomas Veilleux and his wife Ann of Arnold, MD, Roland Veilleux of Largo, FL, and daughter Therese Veilleux of NH; brothers, Paul Veilleux and his wife Jackie of Lewiston, ME, and Alphonse Veilleux of Lewiston, ME; sisters, Irene Fraser of Lewiston, ME, Louise Nickerson and her husband Stephen of Westbrook, ME, and Gloria Moore and her husband Paul of Corpus Christi, TX; grandchildren, Elizabeth Straessle, Danielle Whitley, and Christopher Veilleux, two great grandchildren, Meagan Straessle and Corinne Whitley, and many nieces, nephews and cousins. Don had many friends and acquaintances in and around Hampton. He leaves one very close and long-time friend that was especially dear to him. Visiting hours will be from 2-5 PM Friday, February 19, 2016 at the Remick & Gendron Funeral Home-Crematory, 811 Lafayette Road, Hampton. Relatives and friends are respectfully invited. In lieu of flowers, donations may be made to The Richie McFarland Children’s Center or the Community Hospices of America (CHA) Foundation, 11 Sandy Point Road, Stratham, NH 03885.

Portsmouth &#8211; Donat Robert Veilleux, a longtime resident of Hampton, passed away on Monday, February 8, 2016 at the Edgewood Centre, Portsmouth. He was born on November 16, 1932, in Lewiston, ME, a son of the late Dolor and Anita (Rousseau)... View Obituary & Service Information

The family of Donat Robert Veilleux created this Life Tributes page to make it easy to share your memories.

Send flowers to the Veilleux family.