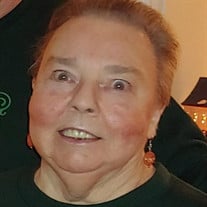 Portsmouth - Doris A. Murphy, 73, of Portsmouth, passed away peacefully at her home in the early hours of the morning on Monday, August 5, 2019. Doris was born in Exeter on December 31, 1945, a daughter of the late Omer and Gabrielle (Baron) LePage. Raised in Exeter, Doris attended the local schools and graduated from Exeter High School with the Class of 1963. In 1965 she met Richard L. “Dick” Murphy, her beloved husband of 53 years. They fell in love instantly. Dick enlisted in the U.S. Air Force in January, 1966 and they married seven months later. The couple lived all over the country, including Alaska, New Jersey, and Florida. After Richard retired from the Air Force in 1986, they settled in Burlington County, NJ where Dick was last stationed. Doris eventually retired as a guidance secretary at the former Burlington County Institute of Technology. Doris and Dick traveled from sea to shining sea for several years in various RVs before they relocated to Portsmouth in 2016. It was clear to all who knew Doris and Dick that they were truly in love. Doris was Dick’s “Little Honey” and they were inseparable, going everywhere together and sharing many beautiful memories. In addition to her devoted husband, Doris is survived by her children; Kelly Murphy, of Tucson, AZ and Scott Murphy of Cincinnati, OH, her three brothers Richard LePage and his wife Emily of Stratham, Paul LePage and Roger LePage and his wife Sherry all of Madison, WI as well as her many nieces and nephews. Doris will be sadly missed by all who knew and loved her. Visitation will be from 11am to 12pm on Thursday, August 15, 2019 in the Remick & Gendron Funeral Home – Crematory, 811 Lafayette Rd., Hampton. Services will immediately follow the visitation starting at 12pm in the funeral home. Burial will be private. If desired, memorial donations may be made to Southeast Land Trust of New Hampshire# 6 Center St., Exeter, NH 03833 or to the Pease Greeters PO Box 22311, Portsmouth, NH 03802-2311.

Portsmouth - Doris A. Murphy, 73, of Portsmouth, passed away peacefully at her home in the early hours of the morning on Monday, August 5, 2019. Doris was born in Exeter on December 31, 1945, a daughter of the late Omer and Gabrielle (Baron)... View Obituary & Service Information

The family of Doris Ann Murphy created this Life Tributes page to make it easy to share your memories.

Send flowers to the Murphy family.