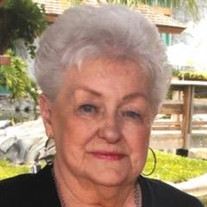 Portsmouth – Dorothy P. LaPlume, 81, of Portsmouth and a former longtime resident of Lawrence, MA, passed away peacefully on Tuesday, September 24, 2019 at Portsmouth Regional Hospital. She was the daughter of the late George and Rose (Black) Bowden. Dorothy was raised in Lawrence, MA and shortly after graduation from high school, she enlisted in the United States Air Force. After honorably serving her country, she married and settled in Lawrence to raise her family. She met her longtime companion, Robert Leonard, and subsequently relocated to Portsmouth in the 1980s. Dorothy worked numerous jobs throughout her life and is a retired Administrative Assistant for the State of New Hampshire. Dorothy loved to paint, read and travel and was a very talented lady who hand-made many arts and crafts projects for her family and friends. She was an active member of the Red Hat Society and also enjoyed her monthly get-togethers with her friends in the “Lunch Bunch.” In addition to her longtime companion, Robert Leonard of Portsmouth, family members include her son, Robert LaPlume II and his wife, Patricia of Egg Harbor Township, NJ, her daughter, Paulette LaPlume of Derry and her grandchildren, Sarah Lovelace and husband, Charles of Juneau, AK and Dylan LaPlume and wife, Tiffany of Virginia Beach, VA. She also leaves her brother, George Bowden of Palm Springs, CA and her sister, Elaine Finocchario of Methuen, MA. She was predeceased by her son, John LaPlume and her sister, Marilyn Demers. Visitation will be from 11:00 to 1:00 on Saturday, September 28, 2019 in the Remick & Gendron Funeral Home-Crematory, 811 Lafayette Rd., Hampton. In lieu of flowers, memorial donations may be made to the United States Veterans Artists Alliance

Portsmouth &#8211; Dorothy P. LaPlume, 81, of Portsmouth and a former longtime resident of Lawrence, MA, passed away peacefully on Tuesday, September 24, 2019 at Portsmouth Regional Hospital. She was the daughter of the late George and Rose... View Obituary & Service Information

The family of Dorothy P. LaPlume created this Life Tributes page to make it easy to share your memories.

Portsmouth – Dorothy P. LaPlume, 81, of Portsmouth and a former...

Send flowers to the LaPlume family.