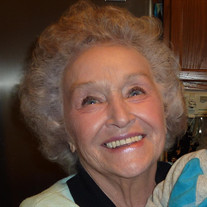 Hampton - Dorothy (Bahurinsky) Morgan, 91, of Hampton, passed away of natural causes on Sunday, November 29, 2015. Dorothy was born, April, 12, 1924, in Charleroi, Pennsylvania, daughter of the late Michael and Mary (Buchiak) Bahurinsky. Dorothy is survived by her husband, John Morgan Jr., daughter, Debra Ann, two sons, Jeffrey and Gregory and two grandsons, Nicholas and Christopher, her brother David, numerous loving relatives, friends and the congregation at Trinity Episcopal Church of Hampton. It is no surprise to anyone who knew Dorothy that she reached the age of ninety-one. Her strong character, tireless energy and independence are surely contributing factors of her longevity. Growing up for Dorothy was much different than it is for today’s children. She was one of ten children raised on a farm in Meadville, PA, during the great Depression. Her home had no electricity or indoor plumbing. She walked to her one room school house in rain and snow. Though she dropped out of high school, she made certain her children received good educations. She taught them to work hard and to be kind and generous to those less fortunate. No child ever had a better Mother than she. Dorothy worked for Lindt and Sprungli Corporation in Stratham, for 17 years, retired at the age of eighty-three and often said they were the happiest years of her life. She loved her family most of all, her job, but her flowers were her passion. She greatly enjoyed working in her yard, from spring until fall, caring for her many beautiful flowers as if they were her children. Dorothy believed with every fiber of her being that God loved her. She could not have lived if she had thought otherwise. In the words of Margaret Thatcher, “we may be sure that God never forgets those who remember him. As the last journey of this faithful pilgrim took her beyond the sunset and as heaven’s morning broke, I like to think, in the words of Bunyan, that all the trumpets sounded on the other side." We who knew Dorothy have one beacon to guide us that Dorothy never had. We have her example. Let us give thanks today for a life that achieved so much while starting from the most humble of beginnings. The family wishes to thank all of those who cared for her during her last illness. Visiting hours will be from 2-4 P.M. Friday, December 4, 2014 at the Remick & Gendron Funeral Home-Crematory, 811 Lafayette Road, Hampton with services immediately following at 4 P.M. in the funeral home. Relatives and friends are respectfully invited. In lieu of flowers, donations may be made to the New Hampshire S.P.C.A., P.O. Box 196, Stratham, NH 03885.

The family of Dorothy B. Morgan created this Life Tributes page to make it easy to share your memories.

Send flowers to the Morgan family.