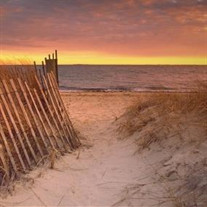 Seabrook – Dr. Edmond F. Gauron Jr., 93, of Seabrook, passed away peacefully on Friday, February 1, 2019. He was born in Seabrook on August 4, 1925, a son of the late Edmond F. and Villa (Dow) Gauron. Raised in Seabrook, he graduated from Newburyport High School. Drafted into the Army following graduation, Dr. Gauron proudly served during the Battle of the Bulge. Returning home from the service, he attended and graduated from the University of New Hampshire and later Tufts University School of Medicine with his PhD. After serving his residency in Lewiston, ME he moved to Hampton to start his own practice, Hampton Medical Group which he owned and operated for 35 years. During that time he also acted as the Chief of Staff at Exeter Hospital for a number of years. Dr. Gauron was a religious man and member of the Rand Church in Seabrook for many years. He was also a devoted family man and avid Red Sox and Patriots fan. He shared 56 years of marriage with his late wife Meredith (Fowler) Gauron who predeceased him in 2008. Surviving family members include his children, Lois Gauron of Seabrook and Scott Gauron of Portsmouth; grandchildren, Scott Jr., Kelsey, Greg and great grandchildren, Alex and Hunter. Visiting hours will be held from 5 - 7 PM on Wednesday, February 6, 2019 in the Remick & Gendron Funeral Home-Crematory, 811 Lafayette Road, Hampton. Service will be held at 11 AM on Thursday February 7, 2019 in the Rand Memorial Congregational Church, 134 South Main Street, Seabrook, NH 03874. Burial will follow in the Wildwood Cemetery, Seabrook. Relatives and friends are respectfully invited.

The family of Dr. Edmond F. Gauron Jr. created this Life Tributes page to make it easy to share your memories.