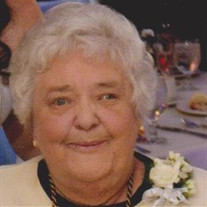 Hampton – E. Joan Tapper, 85, of Hampton, died peacefully Friday, February 26, 2016 at home, surrounded by her closest friends. She was born January 14, 1931 in Moncton, NB, Canada, the daughter of the late A. Herbert and Annie A. (Thompson) Robinson. Raised in Moncton, she later moved to Toronto where she met the love of her life Harry W. Tapper. The couple moved to Hampton in 1962 and made their life together here until Harry predeceased her in 1989. Joan was employed as an administrative assistant by the Dunfey family and later with their successor, Omni Hotels retiring after 25 years of service. Harry was her life and she also enjoyed telling stories of her years working with the Dunfey family. She was a very giving lady and loved all animals. She also volunteered at the Hampton polls on election days. She leaves caregivers and friends, Heidi Gannon who was like a daughter to her and cared for her with her husband Sean and family the last 15 years, Amber Comellas, Peggy Creighton, Gina O’Brien, Hansi and Marie Kruger and family and her faithful canine friend Sammy. Visiting hours will be from 5-7 P.M. Tuesday, March 1, 2016 at the Remick & Gendron Funeral Home-Crematory, 811 Lafayette Road, Hampton. There will also be a celebration of Joan’s life from 5-8 P.M. Wednesday, March 2, 2016 at the Victoria Inn, 430 High Street, Hampton. All are invited to attend. In lieu of flowers, donations may be made to the New Hampshire S.P.C.A., P.O. Box 196, Stratham, NH 03885 www.nhspca.org or to the American Diabetes Association, P.O. Box 11454, Alexandria, VA 22312. www.diabetes.org.

The family of E. Joan Tapper created this Life Tributes page to make it easy to share your memories.

Send flowers to the Tapper family.