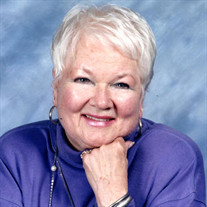 Durham - Ethel “Thelma” Hutton, born on October 8, 1925, passed away Monday, July 26, 2021 at Harmony Homes by the Bay in Durham, NH at the age of 95 with her loving and devoted daughter Patrice at her side. Thelma was born in Lowell MA, to Ethel (Trickett) Mitchell and Willis Mitchell, who had emigrated to the US from Newfoundland, living most of her youth in Everett, MA. Married to Charles F. “Hut” Hutton in 1946, they moved to Derry where they raised their family and became involved in the community. Having graduated for Everett High School in the mid 40's, Thelma later went on to earn an associate degree from White Pines College and then a BA in social work from UNH. Thelma worked as a social worker for Rockingham County until her retirement in 1992. Thelma was actively-involved with Eastern Star in Derry. Additionally, she served as Mother Advisor for Rainbow Girls and supported Hut's Masonic and Shriner endeavors. Faith and family were two foundations of her life. A lifetime member of the Episcopal Church, she served in many capacities at both The Church of the Transfiguration in Derry and later at Trinity Episcopal Church in Hampton. Traveling both nationally and internationally as Representative to Province 1 of the Episcopal Church, she worked tirelessly to support the projects of the United Thank Offering. In more recent years, she loved to share her wealth of knowledge with those who visited the Food Pantry at Hobbs House/Trinity Episcopal Church. Thelma frequently talked about how proud she was of her children, grandchildren and her extended family by choice and love. The deep connection, love, and support of the extended family for each other brought her great comfort and joy. Thelma was preceded in death by her husband, parents and four brothers, Bill, Jim, Charlie and Ted. She is survived by her children Barbara Mitchell Hutton, (Pam McKinnie), Patrice Hutton Wood, Janice Hutton Malek (John Malek) William E. Hutton (Nadine Carson Hutton), grandchildren Christine, Kelly, Rebecca, Matthew, Julia, Anna, Kathryn, and Chelsea plus eleven great grandchildren. Numerous nieces, nephews and extended family mourn her loss. Her unconditional love, sense of humor, compassion, quest for adventure, passion for travel and a questioning mind that embraced all life has to offer, marked hers a life well lived and loved. God speed, good and faithful servant. A Celebration of Life will be held at a future date. Please check back for date and time. In lieu of flowers, donations may be made to Trinity Episcopal Church, 200 High St., Hampton, NH 03842

The family of E. Thelma Hutton created this Life Tributes page to make it easy to share your memories.

Send flowers to the Hutton family.